Should any information written on the scoresheet by the players be accurate?

12.4 The scoresheet shall be used only for recording the moves, the times of the clocks, the offers of a draw, and matters relating to a claim and other relevant data.

I believe this rule has been used before, against Wesley So in the 2014 ACP Golden Classic tournament (more here). But, what about this? 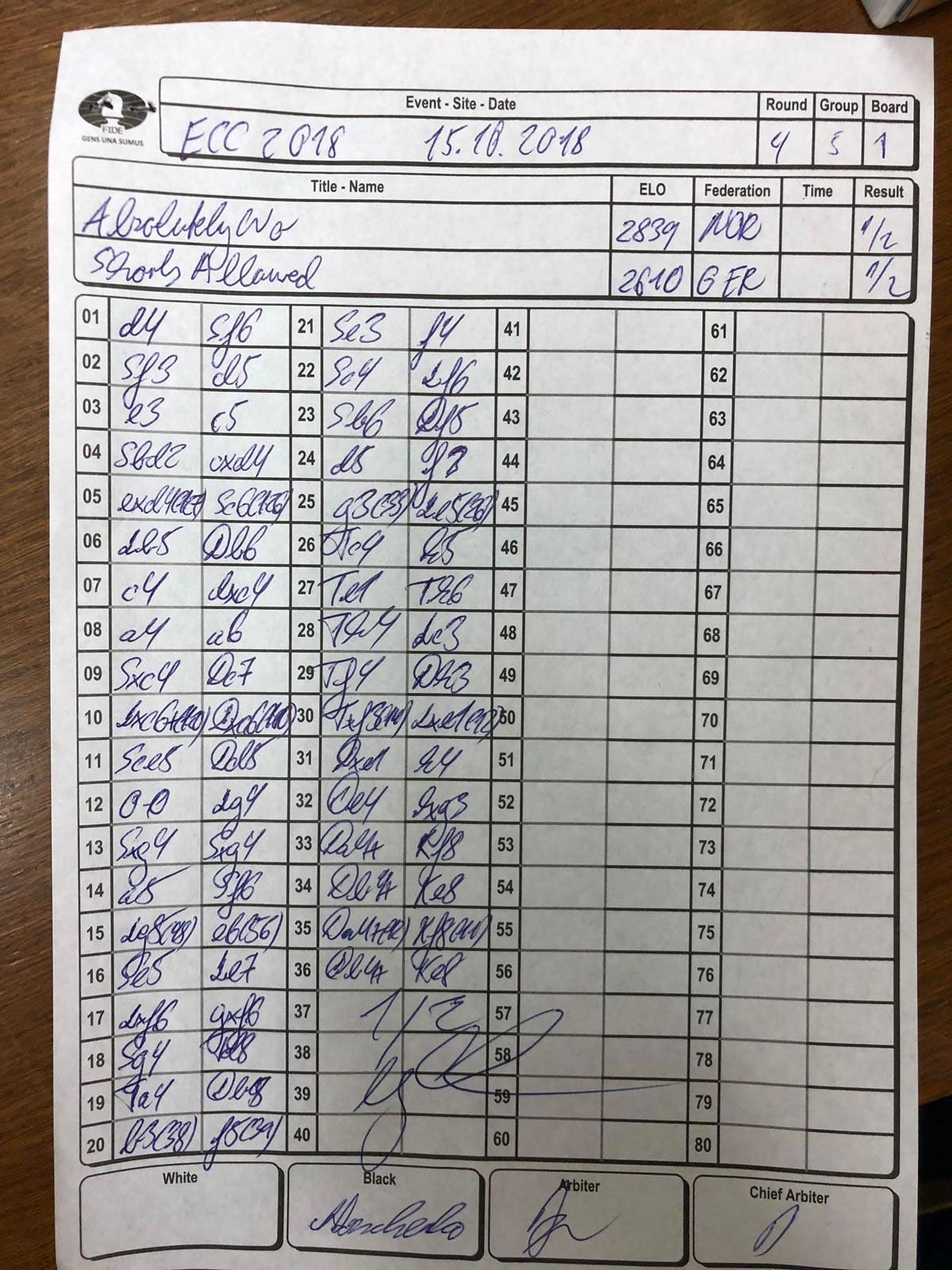 This is Carlsen's scoresheet from his game with Alexander Donchenko in the 2018 European Club Cup, where he wrote "Absolutely no shorts allowed" instead of writing his and his opponent's names.

Isn't this a violation of the rules? Why didn't the arbiters take appropriate action?

I believe this rule has been used before, against Wesley So in the 2014 ACP Golden Classic tournament (more here)

Both you and "LuisFSiles" in the chess.com article you quote are wrong. So was warned three times not to write other things on his scoresheet but was not punished (in that case by losing the game by default) for writing unauthorized material on his scoresheet. He was punished for deliberately disobeying the arbiter on three occasions.

Isn't this a violation of the rules?

Yes, it is, albeit a very minor one. The normal approved arbiter action would be to warn the player not to do it again.

Your assumption doesn't make sense. We don't know if the arbiter took action or not.

If the arbiter saw (and paid attention to) the fact that Carlsen had written what he did on his scoresheet then the appropriate action for the arbiter to take would have been to do what the arbiter in the Wesley So case did and give Carlsen a warning. We don't know if that happened or not. In any case. not surprisingly, there was no repeat offence from Carlsen. Carlsen did not wilfully disobey the arbiter even once let alone three times. Hence no reason why the arbiter would take any more obvious action that we would know about like awarding a time penalty.

In this kind of high level tournament the PGNs of the games have to be sent to FIDE. If there are no DGT boards then this transcribing to PGN has to be done by a human but that would not necessarily be the arbiter and it would not necessarily happen the same day. It might even happen after the tournament. In this case I would expect that Carlsen would be playing on a DGT board and so the moves would be recorded electronically. In that case an arbiter might never check the scoresheet and would never know.

What has also to be remembered about the Wesley So case is that it was instigated by an opponent complaining to the arbiter.

Not the answer you're looking for? Browse other questions tagged rules fide carlsen scoresheet wesley-so or ask your own question.

10
Why do they keep the scoresheet in classic chess?
8
What are the different rules for claiming a draw?
7
FIDE tournament rules: Is a player allowed to scribble notes on the scoresheet while the game is in progress?
4
Where to keep the scoresheet
9
What should the penalty be for a player leaving the playing venue?
8
Are there any rules for transgender players in chess?
3
Should the Laws of Chess have an overseeing board independent from FIDE?
13
Are banter blitz players who draw arrows on the board during the game breaking the FIDE Laws of Chess?
4
What's the best alternative to the 'scoresheet' blunder checking strategy?
9
I refused to sign the scoresheet but the arbiter signed with my initials. What should I do?