Is a pawn still backward if other pieces can defend it?

What exactly is a backward pawn? Is it a pawn that can't be defended by its own pawns or if other pieces can defend it, is it still considered backwards.

As an example, in the following is e5 and d4 backwards`.

Also, if a pawn is backwards if it can't be defended by its neighboring pawns, then doesn't this mean that every pawn starts off as backwards in the initial position of the game.

"...it is a pawn that is behind a pawn of the same colour on an adjacent file and that cannot be advanced without loss of material, usually the backward pawn itself. In the diagram, the black pawn on the c6-square is backward." 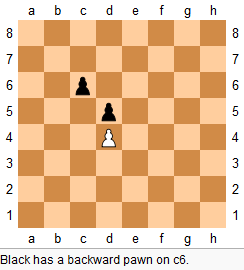 "Pieces can become weak when they are devoted to protecting a backward pawn, since their obligation to defend the pawn keeps them from being deployed for other uses."

So it is still a backward pawn if it is protected by another piece. Perhaps it is protected, but now it has become a burden on a more valuable piece.

The backward pawn creates an obligation upon (and therefore decreases the value of) whatever piece is defending it. There is a penalty if the piece defending the backward pawn moves elsewhere (loss of the pawn).

I don't remember which of the chess books defined it this way, sorry, but I have seen a backward pawn defined as a pawn where the pawns on either side of it are ahead of it or missing. Although if both are missing it is an isolated pawn not a backward pawn.

Using this definition at the start of the game no pawns are backward. In the example none of the pawns are backward since they all have a neighbor pawn on one side or the other that is not ahead of them. Backward pawns are weak points precisely for the reasons mentioned above, requiring another piece to defend them.

In the example if instead of 4.d4 white played 4.Bxc6+ and back responded by playing 4. .. bxc6 then the pawn on c7 would become a backward pawn, and a doubled pawn since there are two pawns on the same file.

In the example as played if black responds 4. .. g6 then he would create 2 backward pawns on f7 and h7. Either of them could stop being backward by advancing though.

23
Can a pawn put a king in check?
2
How can I programmatically detect kings side / queen side pawn storm
5
Extreme effort to keep a pawn backward
1
Can a pawn move to the last row diagonally without a capture?
5
Can a pawn that performed an en passant capture promote at all?
25
Is rotating a pawn so that it faces a different direction and then moves in that direction technically permitted according to the 2018 FIDE Laws?
4
Can the pawn take the rook in this position?
1
How can pawns win a whole game without any strong pieces?
4
How many times can the same pawn move be made in a game?
1
How many unoriginal pawn moves can be made in a single game?