Why and when should one make a zwischenzug (in-between move)?

I know enough German to know that the term "zwischenzug " means "in-between move." Another translation I've seen is an "interpolative" move. Why make such a move?

In GO (where I'm higher rated than in chess), it might be called a forcing move. You make a "throwaway" move that forces a particular response, and then you make your main move, and the two together are stronger than making the main move alone. How might this work in chess?

That's really an enormously broad question. The answer is "because it's a good move, sometimes." :-)

That's the sort of situation where a zwischenzug helps. When what at first looks like a forced sequence of moves can actually have an extra move added to the middle of it that makes the end result better for the side doing it.

Turning this into some actual position with a diagram and such is left as an exercise for the reader.

A zwischenzug is often like sand in the opponent's gear: You block a vital row or column, you start a discovered attack, you pin an important piece or you threat a mate. As this mostly happens when the opponent is in the middle of some tactics, it can bring her out of balance (e.g. giving a check which even loses that piece, but at the same time started a discovered attack on the queen).

So this is all about it: doing the expected move right then would put you in a bad situation, whereas the in-between move improves your position. This famous example contains an in-between move : 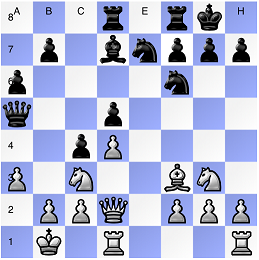 1.Nxd5 White wants to capture this pawn with the Knight

1... Qxd2 Black then captures the Queen on d2 with the following idea: "When White recaptures on d2, I take back on d5 and I am one piece up."

2. Nxe7+ The black Knight was unprotected, thus White capture on e7 with check, forcing the black King to move.

More about the zwischenzug in my latest blog post: http://chesstrainerapp.blogspot.fr/2014/02/zwischenzug-say-it-again.html

What might be the advantage of using such a "roundabout" route to get to the seventh rank?

Using a "Zwischenzug" can be very beneficial. It is also easy to accidentally blunder. However, this is the primary method of introducing chaos into the game. Usually the option to change the course of exchange (or the offering of) is chosen when a player realizes that they can gain an advantage by making a move which was unusual. Perhaps by issuing a check through taking a pawn by sacrificing a knight, and then gaining a knight from some discovered attack. The net result is that you won a pawn. These happen very often, and are sometimes either overlooked, or accidentally made available.

You should always be on the lookout for a Zwischenzug. They can wreak havoc on either your opponent, or yourself, and should be monitored closely.

You make a "throwaway" move that forces a particular response.

This is quite a different question. Often these types of moves aren't made until the end game, when moving a pawn can dramatically weak a position - or when moving the king leaves a pawn unguarded. These moves can also be made as waiting moves, where a trap is set, and the player does not want to unravel it so they will play a waiting move, usually along the lines of pushing an outside pawn; perhaps something like a4 or a5. Timing these moves can be very important, but they are more eloquent than the more combative style of Zwischenzug.

Not the answer you're looking for? Browse other questions tagged learning tactics zwischenzug or ask your own question.

17
What are the origins of the words 'zwischenzug' and 'zugzwang'?
8
When and why should I move the pawns in front of a castled/non-castled King?
3
Chess Tutorials for Beginners
7
Chesscademy Tactic: Is my alternative as good as the right answer?
8
Which one is more important between endgame studies and tactics?
23
What does it mean to ''analyze grandmaster games''?
6
Relation between checkers and chess
18
Do grandmasters think on every move?
7
How could I have prevented this long drawn out game?
3
Identifying principles and thought processes to use in locating a +3.2 or similar move