How does X-FEN (Chess960 FEN) differentiate from traditional FEN notation?

I understand that a modified version of FEN notation is needed to properly record a Chess960 game.

I know that en passant is only slightly different, (an en passant possibility is only recorded if there are adjacent enemy pieces.)

Reading through the Wikipedia article on X-FEN, I don't understand how to record castling. I ask because I am in the middle of creating a chess app, and I want to store game states with FEN.

Can someone explain how castling is recorded in X-FEN notation? Thanks :D

Let's start at the beginning

Minor Note 1 X-FEN is used not just for Chess960 but for many other variants as well (Capablanca chess, Janus chess, Chess480, etc.)

Castling in chess960 is done on two sides: the a-side and the h-side, analogous to queenside and kingside castling respectively. The final positions after castling are the same in Chess960 and in standard chess.

The terms a-side and h-side are used as the initial board configuration is randomized, and what is queenside in normal chess needn't be so in Chess960 (the same applies for kingside.).

Why FEN is insufficient for Chess960

FEN is sufficient for standard chess, as there are only two initial squares for the rooks, on the a-file and the h-file.If a rook from the kingside somehow gets to say, the c-file, there is no question of allowing queenside castling with it as it isn't on the right square. (More on this in an example.)

In chess960, the rooks have many possible initial squares. In the course of a game, both the rooks could end up on the same side of the king. Now, if FEN is used, there is no way of clearly knowing which rook has the castling rights (without knowing the initial position) as either could be occupying the legal square for castling. As a matter of fact, X-FEN assumes by default the outermost rook in such cases to have the castling rights, but that needn't be the case always.

An example to make my point clear 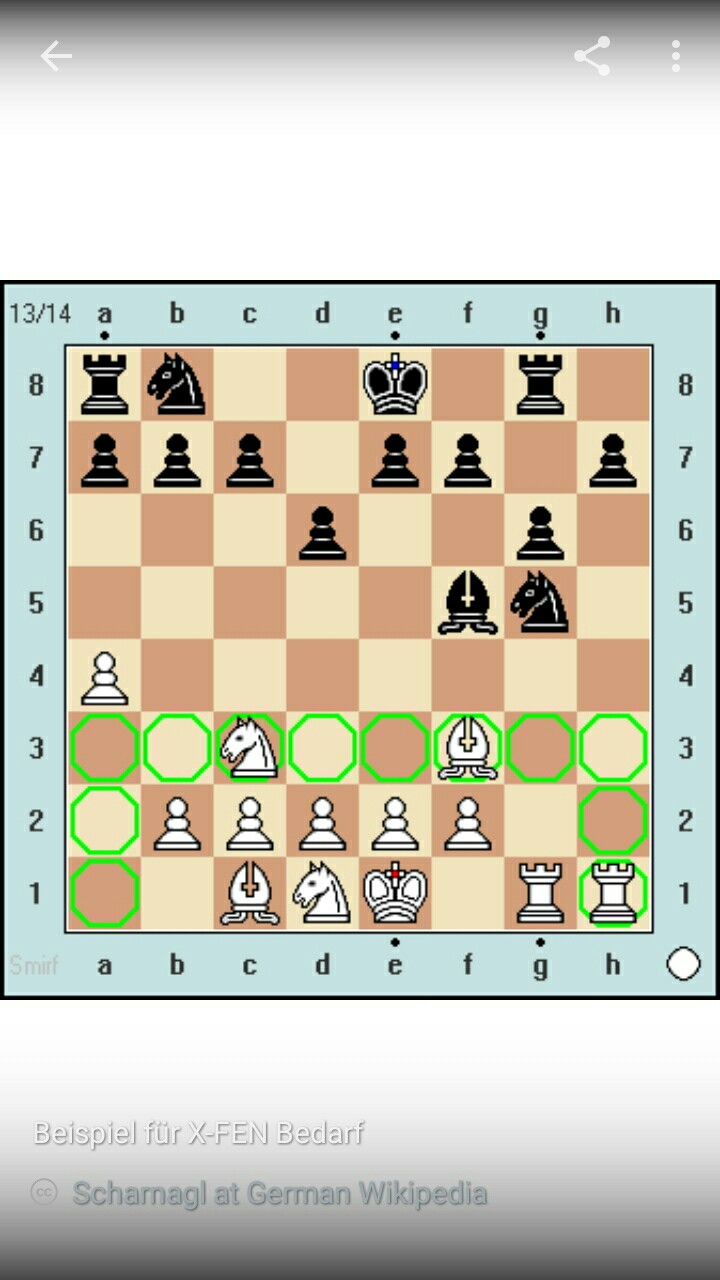 If the above position occurred in a standard chess game, the FEN would simply be

This is because White can castle legally on the kingside, with the rook on the h-file. The rook on the g-file would play no role in castling, simply because that isn't on the legal square for kingside castling.

Likewise, Black can castle only on the queenside, hence the FEN has a q for the castling rights of Black. The rook on g8 is irrelevant.

Minor Note 2 Precise readers might point out that the number of moves and half-moves required to arrive at the position shown, in a normal chess game, might not tally with the values given in the FEN. That is quite possibly true, but I stuck to the value given for the Chess960 game (for the same position) on Wikipedia, for simplicity's sake.

The situation changes if the game is Chess960, simply because the legal initial square for the white rook could be either g1 or h1. We cannot be sure without knowing the initial position. We cannot ascertain which rook has the kingside castling rights.

If the FEN given above was used here, it would confer the castling rights on the rook on the h-file, as the outermost rook is assumed to be the one with the castling rights, by default. It would also mean that Black can castle only on the a-side (queenside, in other words).

As a matter of fact, the initial position for this game was actually

If you notice the bold R's, you'll see that the legal square for the white kingside rook (the one involved in h-side castling) is actually g1, not h1. Similarly, the home square of the black 'kingside' rook is g8, not h8.

This means that using normal FEN not only confers the castling rights to the wrong white rook, it also fails to indicate the ability of Black to castle kingside. It's because normal FEN assumes the initial squares of the rooks to be on the a- and h-files only.

Hence, to avoid the ambiguity caused by normal FEN, X-FEN records the position as

The queenside castling possibility for Black is recorded normally as there is no ambiguity.

In the unusual scenario of three or more rooks (due to underpromotion) being on the same side of the king, with the king yet to castle, there would be an outermost rook, an innermost rook and one or more rooks in between. In such a case, the outermost rook is treated the same way as above, and any other inner rook is identified by its file (depending on which has the right to castle).

For the curious, here's the PGN of the entire example game.

Not the answer you're looking for? Browse other questions tagged fen or ask your own question.

21
How do you know when a FEN position is legal?
4
Software to create FEN notation?
8
Alternatives to the FEN notation
11
How can I scan a chessboard and obtain its FEN?
1
How to determine checkmated positions using DOS/CMD, from numerous FEN/EPD chess positions?
1
Is it preferable to pass a FEN notation or list of moves to a chess engine?
3
Quick method for generating FEN strings from PGN using Python Chess