You are required to find position such that:

1) Any move made by White or Black leads to stalemate for both sides immediately.

2) The position can be reached from the starting position of a chess game.

We are looking for a diagram which can be part of a legal position with either White to move or Black to move. The further constraint is that any legal move by either side must result in diagram which is stalemate, whoever is on move. I am trying to maximize the number of pieces.

At least 30 pieces is possible:

Black g pawn captured the two missing (White) pieces to promote to dark-squared bishop, and also unblocked the g-file for the White pawn to advance. The only legal moves (whoever has the move) would be b3=, but the positions are dead, as would any which satisfy this challenge.

One tricky point is that if Black is on move, then White has many possible last moves, so by the en passant convention, Black is not permitted to capture bxa3ep or bxc3ep.

EDIT: As few as 8 pieces is possible.

If Black moved last it must have been Ke8-f8, Ke8xNf8 or Ke8xBf8. White has many more choices for last move. But in either case the position is legal. 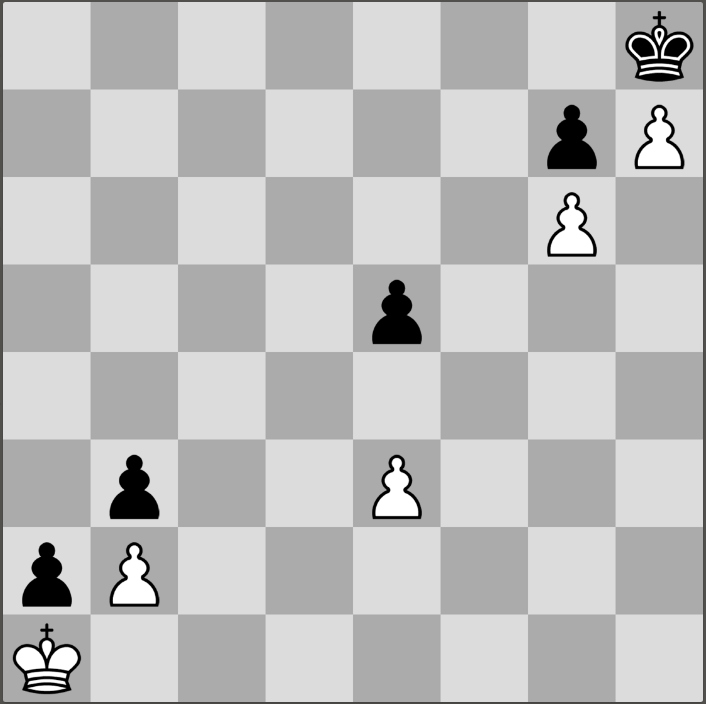 This is a proposed solution, I wonder if we can find more patterns like this with more pieces on the board

If you want a solution that doesn't rely on the en passant convention, here is a solution with 29 men that is heavily based on Laska's answer. The missing White knights ensure that one of the black pawns could have promoted.

When each sides moves their pawn to f3, the only legal move, a mutual stalemate shall occur.

Just as a fun fact, the White dark-squared Bishop could easily be replaced by a knight and the position would still be a mutual stalemate after either side moves.

This shows that 2 pieces is the least that one side can have.

Not the answer you're looking for? Browse other questions tagged problems stalemate or ask your own question.

27
Stalemate situation with all pieces on the board
3
What is one quick way to reach a mutual, symmetrical stalemate position?

9
Is it possible to have a double self-smothered stalemate?
0
Was this considered a stalemate?
10
What is the longest known stalemate your opponent in x-moves problem?
3
What happens if you move your king on stalemate?
6
When exactly does a checkmate or stalemate take effect?
1
An Interesting Idea: Pinned Pieces Stalemate
2
Longest series of mutual “!” moves
30
Endgame puzzle: How to avoid stalemate and win?
27
Stalemate situation with all pieces on the board