What are some physical chess simulators?

My father likes to play chess but doesn't have any friends who would play with him. I suggested him playing it on tablet device but he doesn't like the touchscreen interface. He needs to touch the pieces.

Has anyone built a physical chess simulator (electricity powered, AI included) that will move the pieces on its own? I didn't find on googling.

EDIT. on further thinking I think it's hard to have such technology without using robots (one cannot just slide all the pieces - like Knights). May be if the board blinks lights below the piece it wants to move (with green light) and target location with another light (say red), then we can move opponents piece on the physical board.

Edit 2 Found this!: [Novag Obsidian] https://www.youtube.com/watch?v=7sAvribpPvA that kinda solves the problem. If you know better alternatives please post in answers.

This includes the Novag Obsidian you linked or Saitek Kasparov or many others. As far as I am aware these type of computers have been largely deprecated in favour of PC/tablet/internet solutions. Still you should be able to find one new or second hand. With these types of computers the AI moves are usually indicated by LED, either on the side of the board (row/column) or by LEDs for each square. Apparently there is one (Phantom Force Electronic Chess by Excalibur) which even moves the pieces on its own, but does not have great reviews.

If you get one of these types of computers, make sure that the playing strength is sufficient for your purpose. Most of them can be beaten easily by somewhat experienced club players of say 2100 ELO or so.

The cheapest solution is to get a cheap board and pieces for around USD 20 and use a PC/laptop/tablet to run a chess program or to access an online chess site to play against computer or human players. Of course this would mean that you still have to transfer manually your and your opponent's moves between the physical board and the computer/tablet.

You can get rid of half the work, if you buy an electronic chess board ("eboard") which you can connect to a PC. "DGT" is a major manufacturer of these boards and they ain't cheap. With such a board your moves are automatically transferred to the computer and/or online web site. You still have to manually move your opponent's piecesthough. There are several systems for indicating opponent moves. In any case you could take them from the PC/laptop/tablet screen, but there also exist chess clocks (DGT Pi) which can display moves or chess boards with LED (Revelation II).

Playing strength is not an issue at all with any of these since modern chess engines that you run on a PC/tablet/... are stronger than the strongest humans. 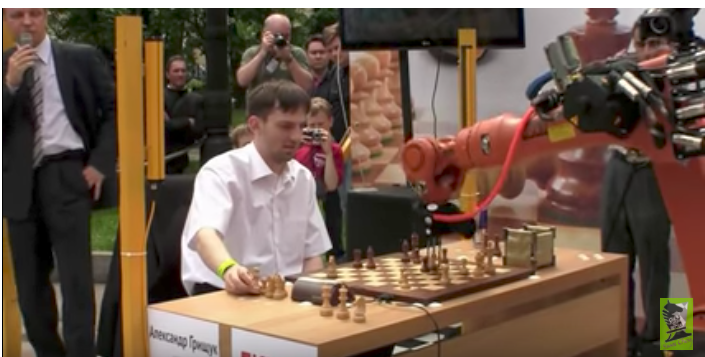 I don't know how you'd get his robot, but it won't be affordable.

Have you seen this page?

Not the answer you're looking for? Browse other questions tagged chessboards or ask your own question.

8
What are some good quality magnetic chess sets?
2
Chess Pieces like classic 1997 “Pure Mate” ad
1
Are alphanumeric style chessboards becoming less popular?
2
Electronic chessboard, what are they used for?
2
How to determine the value of a chess set?
1
What are the characteristics of a good chess board?
1
What Chess board companies are the most reputable?
3
Real Chess Board which detects the moves we do
2
Are there non-Chess games that use a chess board with “black on the right”