Has anyone ever played and recorded a full game of Taikyoku Shogi?

I have googled for a little while and found pages and pages of rules and explanations but no documentation. Are there any documented games where the moves have been recorded? It's so ridiculous, I don't believe that anyone has ever been able to finish a game, let alone remember all of the piece movements. 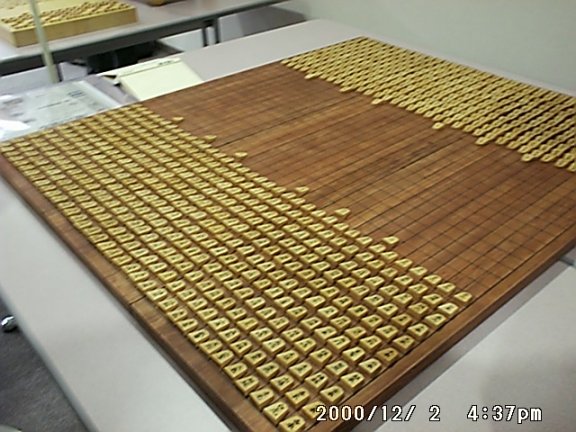 The answer is yes.
According to jawp article, a game of Taikyoku Shogi was played for Japanese TV show "Tribia-no-Izumi" (=Fountain of trivia), broadcast on 19th May 2004. The game continued 32 hours 41 minutes and 3805 moves before the first player won. This seems to be the first full-recorded game of the variant.
Also, there is a webpage dedicated to Taikyoku Shogi with a playing webservice（大局FLASH, requiring Flash Player）.

Not the answer you're looking for? Browse other questions tagged famous-games shogi or ask your own question.

4
Which chess variant has the largest board?

3
Which international tournament game has the record for the longest sequence of forced moves until checkmate?
8
In the game of shogi, what is the meaning of "sabaki"?
14
What are the shogi equivalents of Fool's and Scholar's mate?
4
Has there been a game which was drawn with three queens?
5
What professional game has the quickest sequence, starting from move one, to quadrupled pawns?
3
Looking for the complete game score of Vlastimil Jansa-Istvan Bilek, Rubinstein Memorial 1968
7
Has a "resignation blunder" ever been refused?