Is attempting to capture the king advisable in this position?

This position occurred in a game of quantum chess recently: 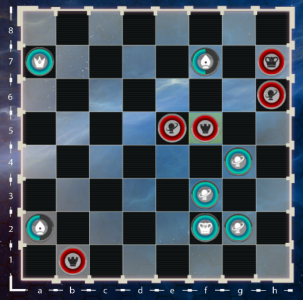 Is trying to take the king with the queen worth the risk?

My reasoning for this is:

What line would follow if the king capture fails? Would it be more beneficial to ignore the possible check and take the rook on f5? What would the best line be from there?

You can check out the rules for Quantum Chess, or read the post written by creator Chris Cantwell.

If this was a normal game and the white bishop was on f7, white would have, among other options, a mate in 7 starting with Ba2+. This also collapses the bishops into one so he doesn't have to worry about which of the bishops is real. So you might think that white could simply do this.

But it's not quite that simple. Since this is quantum chess, black could play Rf^g7, which has a 50% chance of blocking the check, attacking the queen, and getting the rook out of danger. White could respond with Bxb1, and now black is in a quandary - if he plays Rxa7 and it works, that proves that his rook is on g7 and not on f5 and white can play Bxh7 and win the game, and if it doesn't work, that proves his rook is on f5 and not on g7 and white can play Qxh7 winning the game. (If I understand the measurement rules correctly, white will know which of these has happened.) So, black can't capture the queen. If he simply moves his king, white can simplify with Qxg7 followed by Bxf5 with an endgame up a bishop and a pawn (in which black will likely clone his king on the dark squares to prevent the white king from safely advancing... and with potential multiple kings it prevents any sort of meaningful opposition... hmm, maybe simplification isn't as good as I thought. But even without simplification, white has won one of the rooks, which is huge.)

If after Ba2+ Rf^g7 Bxb1, black tries something similar to the series of quantum checks I describe later, by starting with R^d2+ Kg3 R^h3+, it doesn't work because of the pin. White can disarm the attack by trying Bxh7, which has a 3/4 possibility of winning outright, and if it doesn't it still measures and fixes the position of black's rook on f5. Black can play R^g7 again, but the position is not the same, and after Bxf5 black loses half a rook and has no quantum checks available.

But black also has the option of Rb^g7. This potentially attacks the white queen, and now white must retreat the queen or correctly guess the location of the rook. But if white guesses wrong, it's a disaster and he loses the queen. So if white wanted to guess, he should have just done so right away, when it didn't involve losing his queen.

So, maybe Ba2 isn't the way to go for white. Let's look at the seemingly simple gxf5. It wins a rook. Black seems to be toast - but, he has some tricks. He can start with R^f1 which may or may not be check, and either taking it or ignoring it gives white a 50% chance at an immediate loss. So, white must respect the threat, and retreats with Kg3. Black can then put a quarter-rook on h3 with R^h3. White responds with Kxh3, and black puts 1/8 rook on h1 with R^h1. White retreats again with Kg3, and black plays R^g5, placing 1/16 of a rook on g5. Now white's king has nowhere that is completely safe. White can try B^g4 to create additional interference - now, black has only a 1/32 chance of Rxg3 winning. But 1/32 is way better than nothing. While black may have better moves, he can force this after gxf5, meaning black has at least a 1/32 chance of winning after gxf5.

Black could also attempt to attack the queen instead of the king. After gxf5 R^b7 Qc5 R1^b5 Qf8, black can attempt Rg7, entangling with the f7 bishop. White can now attempt Qg8 with a 3/4 chance of winning, but there's a 1/4 chance that the g7 rook is real, resulting in Rxg8 Bxg8 (we know it's the a2 bishop because of the entanglement) Kxg8 and now you have a 3 pawn vs 2 endgame. In normal chess this would likely win for white, but here it's a tossup. So that line overall has about a 7/8 chance of winning for white. But this line isn't forced.

Based on probability lets say we the bishop being in a2 is equally probable as being in f7 (principle of superposition, quantum chess rules).

Taking queen with king is blocked if bishop is in f7, which means there is no move occurring in all possible boards. As it is said in the question, rook is moved out of danger. Probability that this occurs is 0.5 and the loss in the game is black becomes stronger than now as the rook is out of danger.

If the bishop is in a2, moving the queen is allowed. White wins, as question states. Probability is again 0.5 and there is no loss for white.

If the rook is taken instead of moving the queen, again black loses the rook irrespective of where the positioned bishop is. This has a probability of 1. In this situation if bishop is in a2, king is in open check and has to move to g1 or h1, either ways white is way too stronger as it has now 0.5 probability for check mate in consequent step. If the bishop is in f7, king is not in open check and black can play at 50% chance rook b7 as queen can't take rook has 50% and in third move rook takes queen 50% giving 0.125 probability for black to gain hand.

Whereas taking rook has 0.5 probability to win in next move, and less probability that black gains more power.

This is by the way a crude analysis, for just two more consequent steps, as it is quantum chess, anything can happen as the total number of boards increases $2^n$ times for n steps.

27
What are the rules of Quantum Chess?

6
Yusupov - Spiridonov training question
13
Is this endgame position a draw?
1
Awkward situation. Take it or leave it!
0
Monte Carlo Chess
2
Why is pawn to d3 the best move here?
10
Moving into check for a draw as black, why is it illegal? Comparison to Racing Kings
14
"Brilliant Move" - Chess.com - But Why?
22
Why is ..Kh8 so much worse than ..Kg7 after Nf6?
6
Why is this position a forced mate?