What's the point of 7 Kf1(Krakow Variation) of the Italian game?

The variation goes(I will do it through the scotch gambit)

I suppose the alternative is to play Bd2, but I believe that black manages to often hold a draw here because of theoretical repetition lines. White could of also played Nc3, though tricky, Black seems to be doing fine if they know the theory. Thus, it seems like Kf1 is played to avoid a draw. However, if avoiding a draw is desired, why not simply play e5 instead of cxd4? Is there really anything in this Kf1 variation or is it harmless? 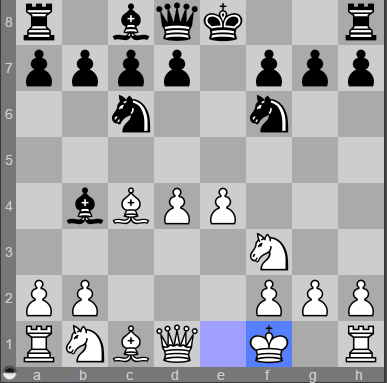 I guess it's a surprise weapon, no need to be excellent objectively. The position is around equal after Kf1 and black must deal with new situation, while white probably knows what to do next moves. Black must deal now with vulnerable bishop on b4 and two connected central pawns. He goes wrong, he can get into trouble. He goes right, the position will be normally playable for white. The point is not to allow the bishop b4 to be exchanged. This bishop can run to various tactics.

The point of 7.Kf1 is more of a refrain from playing Bd2/Nbd2/Nc3 and allowing black to exchange off his dark-squared bishop: he wants to play against the bishop on b4. However, subsequent analysis shows that white gives up more than he gains; for example, black can take on e4 and survive the complications that follow after 8.d5, which is why this isn't the most popular variation for white.

As with most off-beat lines, this is a trappy variation; if black doesn't react correctly, and/or doesn't understand the position well enough, he will get into trouble. For example, in this case, when faced with this position over the board as black, the first thing you'll probably need to work out is whether 7...d5 would lose after 8.exd5 Nxd5 9.Qb3 intending 10.d5. If you decide against it, and play something timid like 7...Be7, intending to play slowly, white just goes Nc3, perhaps Bg5 and h4, and suddenly white's position looks pretty great.

For the sake of completeness, to answer your question: 6.e5 is a well-known variation. White could, of course, try to win a theoretical battle, but this is neither a strictly better nor worse approach than trying to catch your opponent off-guard.

The point of Kf1 is to gain time or tempo for white. White has a large pawn centre and he has to depend upon it. Black's b4 bishop now becomes useless with nothing to attack and becomes vulnerable. After Kf1 if Black takes the e4-pawn with knight then d5 and then Qe2 the knight gets pinned. There can be plenty of lines which can be analysed. White's open files and diagonals are much more open and gives a promising attack. Objectively, black's best move for a HUMAN is d5 here but if he fails to play then white's attack can be ruthless enough for a win.

If instead of Kf1 Bd2 or Nc3 is placed then the bishop has something to attack and can be exchanged which favours black and he has a comfortable game.