When should you charge pawns in front of a castled king?

In a situation where both players castle on the same side, is it ever a good idea to charge the pawns in front of the castled king? Are there any rules for when you can do this? I know that generally those pawns shouldn't move. But I am also increasingly finding it useful in my games to break up my opponent's king's defensive structure by pushing up pawns. If I don't see any obvious attack on my position, is it worth it?

Here is an example position from my previous game. 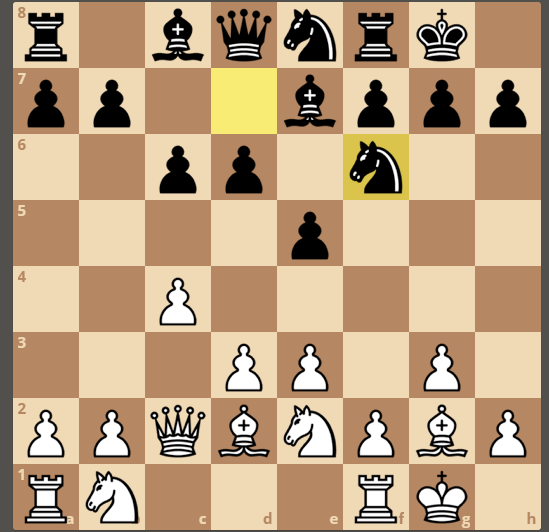 I played h3, stopping a further knight advance and looking at pushing g4 to close off the black's light square bishop. But my deeper idea was always to push those pawns right up to open up black's king. To be honest though, I'm still not sure whether this was a good idea at all.

As others have noted, you should not move the pawns in front of your king except in defense, with very few exceptions, such as:

Note that the center must always be closed. In such types of positions, you should (as others have noted) play on the side containing your most advanced center pawn, i.e. in the direction they are pointing. So, in situations where both players have castled kingside, the center pawns will often be arranged d4-e5 for White, and d5-e6 for Black.

Generally you should play on side where you have advantage in total firepower (P=1, N=3,...). In case of pawn storm in front of your king, the advantage should be bigger than you usually need. You can start easily minority attack with one extra horsie on the queenside, but you should probably not weaken your king seriously when you are just one knight stronger there.

Edit: To make the rule about firepower complete, I would say your king is somewhere around -8 for these calculations while your opponent's around -3. Takes time to get close to him while your king is already weak.

In this position I would play for b4. Good rule is that bishop g2 is very bad kingside attacker!

is it ever a good idea to charge the pawns in front of the castled king? Are there any rules for when you can do this?

What comes to mind first is King's Indian defence where Black attack on king's side (just as an example Gelfand - Nakamura, 2010).

The rule is as usual: side attack could be met by center (or opposite side) counter-attack, so you need to make sure that your center and Queen side survive long enough without much protection. The best measure to achieve this is to close the center first.

Attacking in front of castled kings will surely require from you to keep your rooks before your king too. And then the other side of the board will become absolutely unguarded. So when your opponent wins all the pawns on the other side he can just checkmate you by using his rooks or to create a passed pawn.

On your diagram advancing g- and h-pawns by White looks like nonsense. The center is not closed, and even more than that, Black have more pieces on the King's side than White. So Black can easily meet your g4 by f5. Also moving just f- and g-pawns will be hardly sufficient to open Black's king. You need your f-pawn too. But black pawn on e5 is too strong for this to ever happen.

This is common in many openings with an early f4/f5.

Some examples that I've played include:

The Dutch Defense, mainly the Stonewall

Black will typically play Ne5, and can play for an attack starting with g5

The King's Gambit Declined, by transposition from the Bishop's Opening.

One of white's plans here is to exchange off Black's dark squared bishop before castling, then playing f5 and initiating a pawn storm with h3, and g4.

Personally, the set up I like for white is King's Gambit with a quick castle: pawns->g2 and h3, king->h1, and I think it offers more protection. the set up you have here doesn't allow for you to develop your pieces without losing your king's protection.

Not the answer you're looking for? Browse other questions tagged pawns castling or ask your own question.

20
Why is it a good idea to fianchetto above the castled King? If I do that, should I make sure to leave the Bishop there for a while to guard the hole?
15
The theory of pawn breaks
19
To what extent should you prevent your opponent from castling?
7
When to decide King or Queen side castling?
2
When should you trade to prevent castling?
8
What is it called when opposite colored pawns up against each other?
7
When should I play f3/f6?
4
Is it legal to push the rook with the king when castling?
5
What should be the value change if pawns are doubled?
1
When should you trade off a piece that's defended by two pawns?