How is Kasparov vs Shirov 1992 a victory? 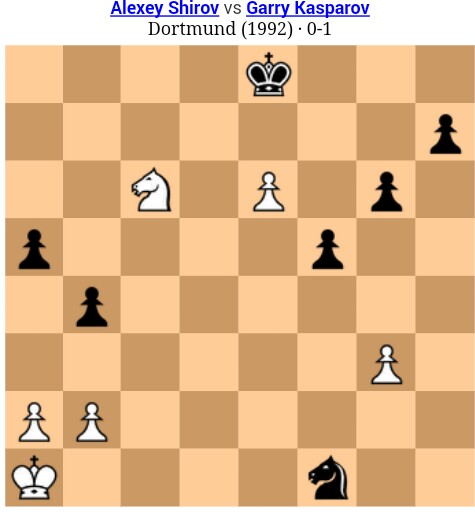 There is no check. Was it a victory on time? Or did Shirov resign? In all the discussion over this game it's just accepted that Kasparov won, without anyone mentioning the reason for his victory. And it is so often called a great game, whereas I don't see any great brilliance. Just 2 guys trading blows. There's hardly a significant difference in material in the final position.

Shirov resigned: the thinking was that despite both sides left with pawns and a knight, the advantage went to Black.

Black has an extra pawn and Black's pawn chain is mutually supporting. White is down a pawn and they are split. White's king is buried too deeply in the corner to either prevent a black pawn advance to promotion or to save White's pawns.

True, White does have a pawn that is more advanced, but Black's king is already central, pretty much attacking the pawn and knight. The white knight is insufficient to protect that pawn. That pawn is pretty much gone, so really Black's advantage effectively becomes two pawns.

With White's advanced pawn gone, advantage becomes three black pawns and a knight against White's single king-side pawn and a knight, except even here Black's knight is already attacking that pawn so it, too, is effectively gone.

Kasparov would truly have to make some blunders to fail to promote a pawn, so pawn promotion was seen to be unavoidable given the position. Hence White resigns.

Black has (almost) three connected passed pawns which will be unstoppable.

Think of white's next move. The pawn in g is lost. If you move the pawn in e, black just leaves the king there and the white knight is pinned. So the only reasonable move is b1, to start taking the king to where the action is. Black can now take the g pawn and start advancing the three pawns to get to promote one of them. I might screw that up, but not a GM. Shirov resigned.

White takes two Black pawns with his next two moves, Ka5 and kb4. Black plays his h pawn to h5 and h4. White moves his N to e5 Black pawn to h3, White N to f3, temporarily blocking the pawn. B moves g5, "chasing" the WN, which goes to h2.

If White is next then:

The White knight can take on a5, whilst Black moves to g5. If White tries to rush the pawn to a4, Black takes en passant. This leaves the Black king to atack e6 and the Black night to attack g3.

But pawn tof4 signals the start of black pushing their pawns forward. which creates a queen on the same diagonal as the white pawn, which is being pushed along on the b-file

If Black turn is first then game over already, because Nxf3, and pawn pushing asap.

Of course, Shirov resigned in this position. Black has got three connected pawns on the K-side to which white has only one and it will fall soon. The black knight makes it more difficult to stop those pawns. The white king is in the corner on a1, and it will never reach the kingside on time to stop any of the black's pawns. As far as the queenside is concerned, the pawns on a2 and b2 are blockaded by a5 and b4. The white pawn on e6, though far advanced, is just a hollow threat, which aided by knight is not enough to threaten the black monarch. Once the white knight moves, the black king will occupy the e7 square. The entire play is on black's side, and white has to wait for his defeat, fighting till the end, only to lose.

Not the answer you're looking for? Browse other questions tagged endgame famous-players kasparov famous-games or ask your own question.

7
Kasparov quote reference
2
Kasparov trying to poison Kamsky
4
Kasparov quote on boldness
4
Reason why Kasparov resigned in the "Enrage the Beast" game
5
What does Kasparov mean by "I was behind in three and even in one after six games"?
8
Who did Kasparov call a talented amateur?
33
Demystifying Seirawan-Kasparov 1983 king and pawn endgame
1
Finding a Kasparov Game
2
Karpov vs Kasparov, Game 41