How should black meet the Halloween Gambit?

Although the Halloween Gambit is generally considered bad (and nearly losing for white), it is tricky to meet over the board, especially at the club level.

How should black play in order to refute white's gambit?

Instead of moving the c6 Knight, black should continue with Jan Pinski's 6...Bb4. Black will just give away the c6 knight and then black will take the e4 pawn with the f6 Knight. White can't take the Knight because his own is pinned and if white moves their queen to d4, black can just move their queen to e7 to protect both the bishop and the knight. A continuation might be something like this:

As you can see from above, if black plays accurately, there can be many discovered checks on white and if black wants, they can continue by taking the bishop on e3 eventually with another discovered check to follow or white will have to take the Knight, but either way, black will just take back with Qxe3+ and it is pretty much over for white.

Here is a professional game between Grigor Minchev and Aleksandr Pretov where black was unable to defend properly and was devastated.

After posting this I realized that I just transposed to pretty common position, which I believe is not all that great for Black. But perhaps the idea of getting a crazy attacker to play a dry position is still valid, so I will keep my post up.

What about returning the knight right away with 5.d6. I don't think that white has any better moves than 6. dxe5 and then exchanging queens. Where white only has a slight advantage.

I realize that this is not everybody's cup of tea, and on pure chess level this is not impressive. However, this might be useful in practical sense. People who play Halloween Gambit love to attack; it is likely that the above resulting position is not to their taste. This would also take them out their opening territory.

When meeting tricky (complex) positions, the best we can try is to simplify the position, this is for sure one of those tricky ones.

I've playing this gambit a lot and stumbled on a good response for Black players who hope to win quickly. In the "main line" (i.e. ..Ng6) play ..d6 instead of ..d5. More often than not White will play f4 which loses to ..de fe ..Nxe5! intending ..Qh4+. It's a nice little trap. 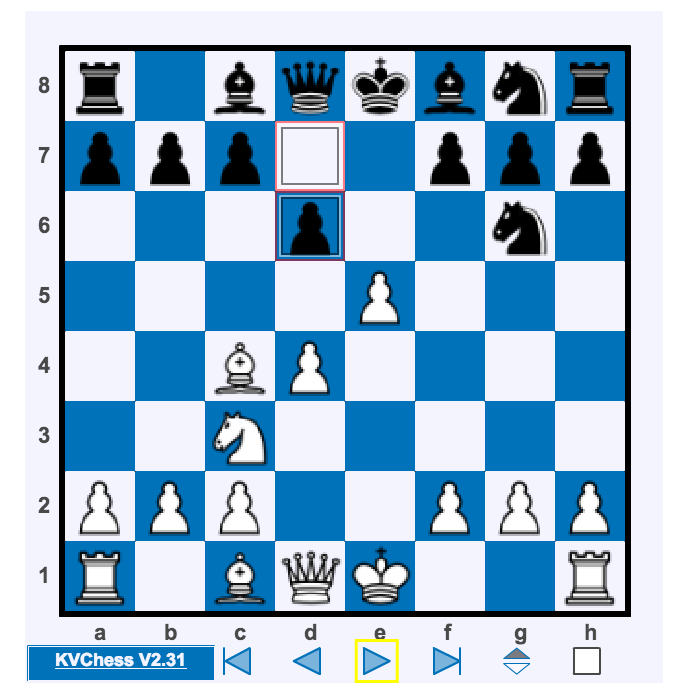 . More analysis of the other lines on my blog if you are interested.

Not the answer you're looking for? Browse other questions tagged opening four-knights or ask your own question.

14
How to best respond to an early black Qa5 in the Smith-Morra gambit?
5
How should black meet 2.d4 in the Sicilian Defense?
6
Is 1. Nf3 Nf6 2. c4 e6 3. g3 b6 a QID even though White hasn't played d4 yet? What would you recommend me against it?
4
Why is it said that beginning with 1. Nf3 2. c4 avoids the Benoni but beginning with 1. d4 2. c4 does not?
6
The Urusov Gambit
11
Outsmarting an intelligent copycat in the Ultrasymmetrical English
4
Not Developing a Piece in the First Five Moves
6
Are there any gambits which yield an advantage for the side down material?
4
Move orders in the 6.Qc2 Anti-Meran Semi-Slav