Is there a Unicode-compatible alternative to PGN?

One of the problems with PGN is that it requires ASCII, while names of players often contain non-ASCII characters. (And of course, many names are not written in the Latin alphabet ...)

The background to this question is the rendering of non-ASCII characters in Arena 3.5.1 (on Windows 7), as in the image below. The names for white and black are Mittelsträß, Jürg and 王, 玥, respectively. Arena reads the UTF-8-encoded file as if it were encoded as Windows Codepage 1252. Editors such as Notepad++, SublimeText and JEdit identify the file as UTF-8 (which is the default encoding of all my plain text files, anyway).

Here's an example PGN for testing:

(SCID assumes a system encoding if a PGN is encoded in UTF-8 without a byte order mark (BOM), but the BOM makes no difference in Areana 3.5.1.)

So I'd like to know if there is a Unicode-compatible alternative (ideally UTF-8) that is supported by some chess programs. (If not, PGN needs an overhaul.)

if you read that, you will notice: 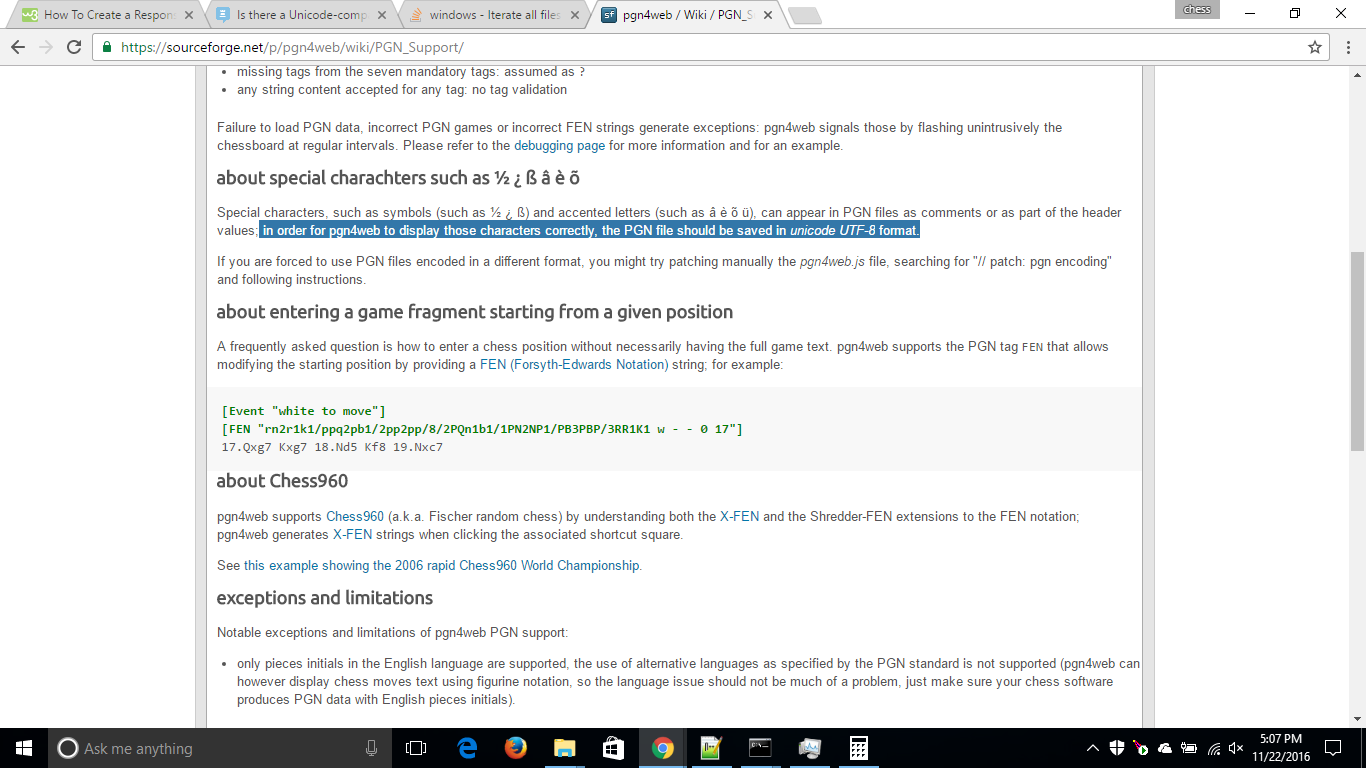 in order for pgn4web to display those characters correctly, the PGN file should be saved in unicode UTF-8 format.

you can save PGN as UTF-8... Just open notepad > Save As... > Encoding and select UTF-8. and you can then add the appropriate player names! I've tested this, and it works with Arena Chess and a few others...

Hope this solves your problem. ~CSS

PGN databases created by ChessBase programs are encoded as UTF-8 by default, too.

Not the answer you're looking for? Browse other questions tagged pgn or ask your own question.

15
Is there a text editor with syntax highlighting for PGN files?
3
Pgn crash course
3
Is there an Android viewer that understands international language comments in PGN?
3
Watson's strategic chess pgn file
4
What is valid PGN?
5
Valid PGN variations?
4
PGN with arrows and circles
1
Is there any software that will print a .pgn file in scoresheet layout
3
Can one use alternative identifiers (from languages other than English) for chesspieces in PGN?