Here's an example of how to do it, plus some general guidance.

I can't find a single game in my 7 MM games database where it was managed, though a couple of players have tried it and come pretty close.

The key difficulty (beyond knowing what to do) is managing the timing; knights can't lose a move, so you can end up being ready to mate in a good position, but having one move too many (or being a move short).

I pulled this mate off once in a tournament game. My opponent is known for forcing his opponents to play out to mate, so I thought it might make the process a more interesting challenge. I promoted two pawns to knights to make a team of 3, and deliberately dropped a bishop in a check that forced capture. I solved the timing problem by keeping a spare rook away from the mating area, and when I found myself needing to lose a move with the king already netted, just shifted the rook. Then I was able to finish the mate.

There are two main types of mating pattern, the side mate and the corner mate. There are a couple of types of corner mate, but once you get close, you'll probably see the one that's eligible in your situation.

Here's a theoretical position I cooked up, to present the most challenging problem I could imagine. I used this as a training position. 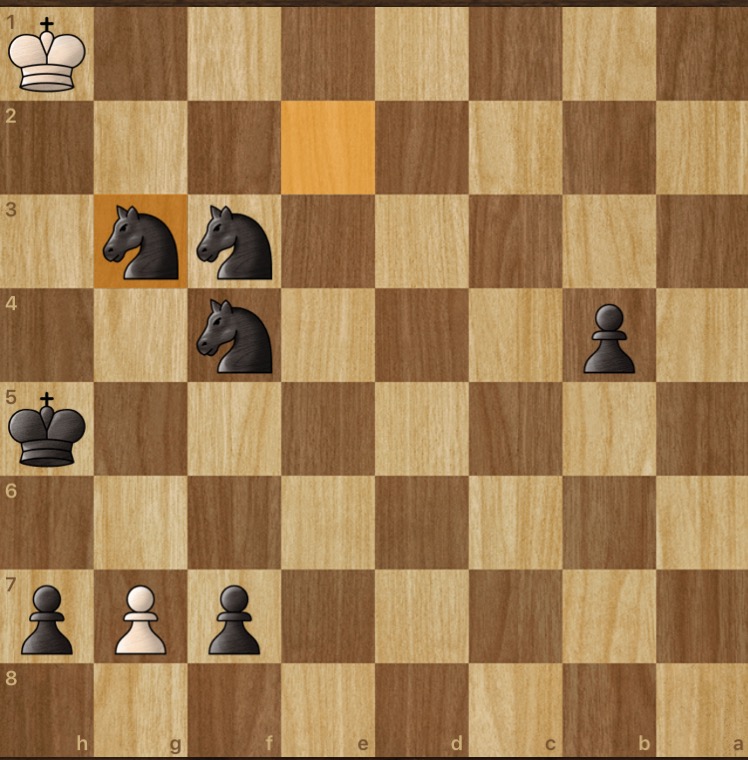 I promoted the C-file to a Knight, and mated 2 moves later; mind you a Queen or even a Rook would have been mate upon promotion

It's entirely possible, although you have to be either dominating already in which case your opponent might resign, or you surprise him with a promoted mating knight where he was counting on you choosing queen.

To answer your 'how', i would suggest pinning the King down in the corner as shown in the picture, and positioning your third for the kill

Not the answer you're looking for? Browse other questions tagged endgame checkmate knights knight-endgame or ask your own question.

-3
King and Three Knights v/s King in end game
7
Checkmating the bare king with 3 knights – can the mate be forced on any edge square?

13
Checkmate with two knights?
3
Longest way to mate with 1 queen against 4 queens
20
Is three knights versus knight really winning?
11
Checkmate with King and Knight vs King and Knight
7
Checkmating the bare king with 3 knights – can the mate be forced on any edge square?
4
2 Knights against 1 pawn (endgame)
3
What should a chess beginner do with his/her knights after 2. Nf3 or 2. Nc3?
9
Which piece combinations can mate a lone king without being aided by the attacking king?