I found myself in a game with this position. Last Black's move was a Queenside castle, which let him a little bit uncovered. My first spontaneous move idea (which I finally played, because of time trouble and having no really other interesting idea) was to play Rc1, to put pressure on the king on the C column added to the fact that my bishop on f4 makes the move Kb8 impossible (and then c4 etc). 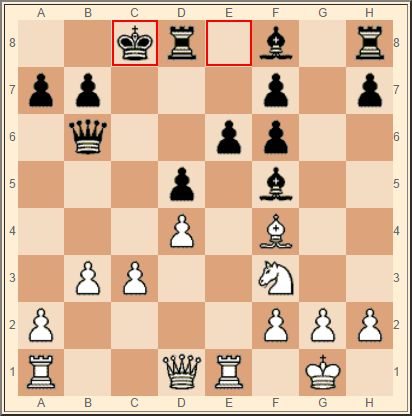 However, this can be easily countered just by playing Bd6.

So, we all know the importance of a threat (which is, like Nimzowistch said, stronger than the execution), but do you think it's a good move in this position ? or, knowing that it can be countered, do I had to choose another "more effective" move ? (like I don't know : a4 ?)

Would you have played Rc1 ? If not, what would have been the best move ?

Stockfish preferred 1. Nh4 with a 60 centi-pawn advantage to White.

The 1. c4 move fares ok at about 40 centi-pawns but by the end any winning chances look like an illusion.

Not the answer you're looking for? Browse other questions tagged analysis tactics attack or ask your own question.

17
Analysis of positional play by a very aggressive player
3
Multi-threat situation
8
Can Black save this Knight vs Bishop endgame with a pawn down?
4
Choosing the best move in the given position
4
Loss to a master, where did I go wrong? Two knights 4.d3 (black)
6
Question about the move h5
2
Queenless Imbalanced Middlegame(2)
9
Calculation skills beyond 2000 Elo
3
Why not 7.Bb4+ before playing Ne7 in the French Defence: Advance, Paulsen Attack?