En Passant vs In Passing

In Lasker's Manual of Chess (written 1932 or earlier) I have just read the phrase 'in passing' referring to the en passant capture. I wonder if this expression is old-fashioned or still in use. Basically, I am interested in whether I can say 'in passing' in spoken language and still be considered correct.

The image shows the exact context. The phrase is right below the diagram. 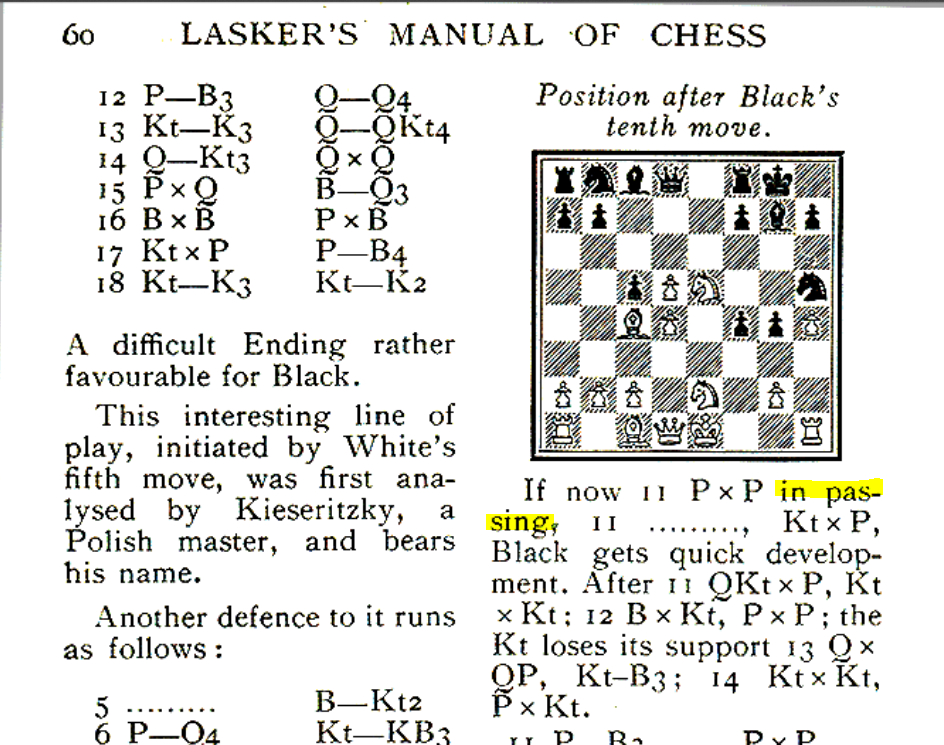 En passant (from French: in passing) is a move in chess.

As far as i can find, 'In passing' is the translation of the name of the move, however it is not actually spoken as 'en passant' is used instead.

One explanation for the appearance of this term is that Lasker, the author of the book, accidentally translated the word. According to this page, the original form of this manual was written in German, and Lasker re-wrote it in English at a later date. He may have translated 'En Passant' into English by mistake, not realising that we also use the french for the term.

In 1926 Lasker wrote Lehrbuch des Schachspiels, which he re-wrote in English in 1927 as Lasker's Manual of Chess.

"In passing" is english for the french phrase "en passant." Just like "vis-a-vis" and "tete-a-tete" is acceptable as are "face-to-face" and "head-to-head." I consider using the language of the listener to be the best course of action. All are correct, but since I teach to kids, I prefer the english.

Lasker originally wrote in German and used the phrase im Vorbeigehen that was translated literally here. Im Vorbeigehen was the usual German term at Lasker's time, but nowadays it is mostly replaced by the French phrase en passant.

en passant does mean "in passing", but the English phrase is not generally used in our specialized chess sense; e.g. Merriam-Webster separates two senses of en passant:

2) used in chess of the capture of a pawn as it makes a first move of two squares by an enemy pawn that threatens the first of these squares.

This is similar to the chess sense of "Luft" (where the English air/space/breath would not be understood as specifically in a chess context), and different from "Zwischenzug"/"Zwischenschach" which are entirely equivalent with their English translations "in-between move/check".

Not the answer you're looking for? Browse other questions tagged terminology en-passant or ask your own question.

29
Rules: en passant and draw by triple repetition
9
How do you use 'en passant'?
12
Why is en passant hardly heard of?
10
En Passant Checkmate
4
What should be defined as an en passant checkmate?
16
En passant for beginners