OK I have read a lot of things on the web most of them using Java that doesn't have unsigned int. I am working on Objective-C that has unsigned int. 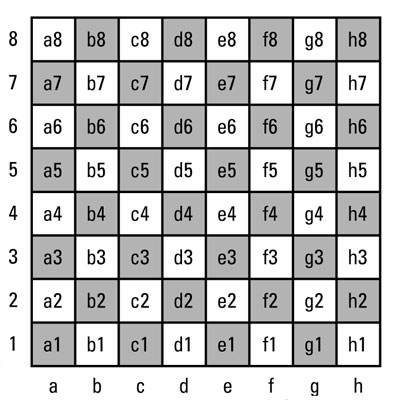 I have constructed the bitmasks for the movements of all pieces for all positions on the board.

Obviously this movement is impossible because there is a pawn on E2.

How do I discover if a movement is valid?

Ok I have the bitmask of all pieces that is this:

if I AND these two

all I know is that there is a piece at that point but I am not seeing how this tells me if that is a valid move or not.

How do I get these informations? Thanks

Let me answer your questions for @MikeJones:

Make a bitboard of all the white pieces. If the AND of the possible knight move and the white pieces is TRUE, then the move is illegal--attempting to capture your own piece.

The simplest way is to make the move and check if the King is in check.

Not the answer you're looking for? Browse other questions tagged engines software attack or ask your own question.

4
How can I automatically extract features from a position?
4
C++ vs Java Engine move generation performance
6
Detect pinned pieces code
4
Minimax and alpha beta
4
Leaving the score aside, what are the criteria allowing Stockfish to choose its “best move”?
4
Are these magics wrong?
1
How to store moves for a magic bitboard system?
2
The most efficient valid move generation for minimax
2
Can pieces follow different paths from one square to another in a single move?
5
HalfKP Structure for Stockfish / Shogi NNUE - how does it work?