How to relax when playing chess?

I always tend to be tense when playing. I guess you could say I find chess somewhat stressful? I see it as a fight to win as opposed to some ordinary board game like Monopoly. I really can't relate to well with people who just play chess because they find it relaxing. For some reason though, I still like the game, even though it's stressful to a certain degree, who knows why?

Would you say this is normal chess player behavior? What do you feel when it comes to chess, I would like to hear some other players' experience. Did you feel stressed out when you first started? Are you still tense or do you find the game purely relaxing?

I play a lot of board games and a lot of chess in particular. I can tell you that every chess player has a certain element of nervous energy whilst playing. This keeps us sharp. These are the reasons I believe chess generates nervous energy in the players:

In a 1972 interview with Bobby Fischer the following famous exchange took place:

WALLACE: Winning for winning's sake is important, but do you like to beat another man?

WALLACE: You smile about it. Do you like to crush another man's ego?

FISCHER: Uh-huh, so when they go home that night, they can't kid themselves that they're so hot.

I think a watered down version of that mentality drives many chess players. It generates a lot of stress which can make you feel really good when you win, really bad when you lose but more importantly it disturbs the calm thinking you need to find the best move and win.

It is a very Western way of thinking and behaving. A more Eastern approach where you enter something like a Zen state, calmly looking for the "truth" in the position, searching objectively for the best moves for you and your opponent, is likely to produce better results by reducing the errors that arise from over-strong emotions and reduce the stress levels.

Of course that stress high may be what some players play the game for. Bungee jumping levels of adrenaline without leaving your seat.

You will often see very strong players sit and think for several minutes before making their first move. Of course it could just be that they are trying to remember their opening computer preparation. I prefer to think that they feel they haven't arrived at the board in the optimum calm state of mind and are composing themselves, trying to enter the necessary Zen state :-) 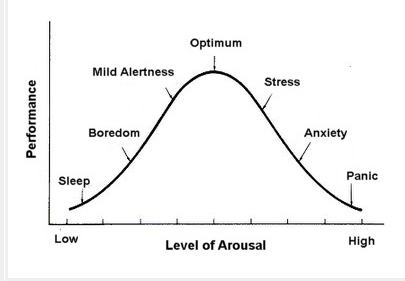 This (or variations thereof) is a common graph from performance psychology. As you can see, some level of arousal is good, but too much can be a problem. Too much stress is certainly a common problem (as is the opposite, too little arousal leading to lack of focus or energy). If you find yourself too far to the right side of the graph, there are many techniques to reduce your arousal. One very helpful idea is to learn some breathing exercises. For example, inhale deeply, count to three, then exhale slowly. This can be surprisingly effective for calming down.

"People ask me what I do when I want to relax and are often baffled when I tell them I race motorcycles. They don't seem to understand that when you're traveling 120mph around a corner with a knee a quarter inch off the asphalt, if you're not relaxed, you're @!^&ed."

The things which relax people are often baffling. I, for one, do not understand how running long distances can ever be considered relaxing, but people do it!

I would argue that there are two reasons why a game like chess is not relaxing. The first is the competitive nature. If you focus on winning the game above all else, you will naturally enter a stressing mindset. For some environments, such as tournament play, this is desired. In more casual games, it can be undesirable. It can help to reframe the game not as a way to compete with the other person, but as an opportunity to better yourself, sharpening your claws within the rules of the game.

The other reason is that you use stressing approaches. This can happen to anyone, and can go completely unnoticed. We often have many different ways of resolving a situation, each of which taxes the brain in different ways. For example, we may be able to use a gut instinct approach to play where you slowly look at the position until it makes itself clear to you, or we may use a highly analytical approach which involves keeping mental maps of game trees and board positions in our head. Choosing the latter will add to stress, no matter how much you focus on bettering yourself.

The Zen solution to this is not just to focus on bettering yourself, but to focus on letting the game make you more aware of what is going on inside. When you realize that you are using a particularly punishing approach to a position, revel in it. Use it as an opportunity to learn how to use that tool. In general, this leads to a decrease in stress as you home that tool into something which is just as effective, but far less stressful.

We do see a pattern in human nature for relaxation. Many people who learn to relax while doing an otherwise stressful action teach themselves to strive towards something which can only be attained by relaxing. Through this, they gain the skill to relax anywhere, and that is a powerful skill.

There are people who are at their calmest jumping out of perfectly good airplanes. I'd call them freaks, but who am I to judge. The things which relax us are tremendously personal. I recommend exploring them.

Not the answer you're looking for? Browse other questions tagged psychology or ask your own question.

39
Why do so many children stop playing chess?
20
What to do after losing a game?
3
Attack or defend? Which is best approach to win?
6
Problems with chess anxiety?
6
Facing irregular or uncommon openings
5
Recover lost passion
3
Help with mistakes
19
Brain fog when playing chess
24
Is chess a good game for recovering addicts?
2
Hard anxiety playing chess