I know how to win the endgame with bishop and knight, but it is a slippery process and seems to be just barely a win, with the enemy king very nearly escaping. For this reason, I am curious about this endgame on other board sizes and if it will still be possible in the general case of an MxN board. Let's assume the 50 move rule doesn't apply.

Here are a few examples.

First, on an odd size board, I've confirmed that white cannot force mate if the bishop is on the wrong color. Mate can only be forced in a good corner (one that the bishop controls), so if there are no good corners, mate cannot be forced.

This can be played out on apronus.com.

It is long, but playing through it definitely helped convince me that white could force mate on an arbitrarily large board. In the first phase, the white king and bishop can corral the black king while buying tempi for the white knight to catch up. Once the black king is trapped in the bad corner (a16 in this case), it is shuffled down the a-file with very little breathing room. Although the procedure is significantly more complicated than a W maneuver, white appears to always be in complete control.

Let's start with the 7x7 question:

Is there a forced win on a 7x7 board, with a bishop of the 'wrong' color?

This seems to be the easier of the two questions to answer. First, convince yourself that this is the only mating pattern (the Black king could also be on the dark square immediately to its left).

The key point is that it is not possible for White to force this position. Black's king would have been stalemated on the previous move. Alternatively, if Black's king is moved one square to the left, the only legal move that white could have just played would be to move the bishop onto that diagonal, delivering mate. If this were the case, where was Black's king before that? It would have been on f2 (two to the left, one up). So Black was not forced to move into the corner and could have instead avoided the mate. To conclude, there is no way to force mate in the wrong corner; shortening the board doesn't change this fact.

In this case, White will have a proper corner, but let's assume that White can force the Black king into the wrong corner. n the standard 8x8 board, White has to release the king from the side for a few moves in the process of driving the king to the mating corner. See Wikipedia for a complete tutorial. Here is the normal position when Black flees the edge (temporarily).

Black usually plays Kc6, and then after Bd3!, the king has no escape. On a 10x10 board, however, Black could play Kb7, followed by Ka7, and finally, Kz6, as we will call the first file to the left "z". White has no way to get the king and knight over to help prevent the Black king from escaping the bind. So again, it's a good thing that the board is only 8x8, otherwise, the bishop and knight would never get to mate the king!

Disclaimer: I have not proven any of my assertions with tablebases

There are obviously many forced wins on any boards where M and N are at least 8 (including M or N or both infinite), so long as there is a corner of the same colour as the bishop's square. 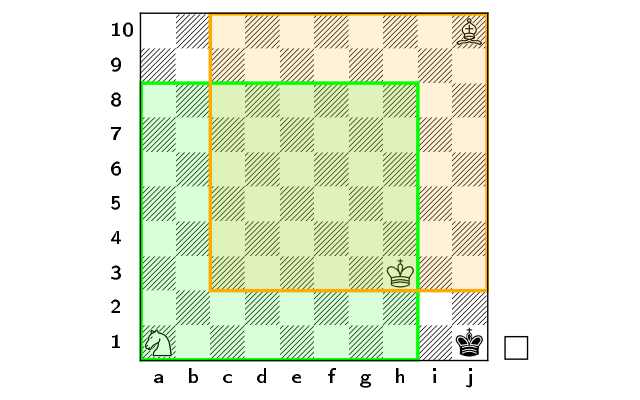 If the pieces are all in the yellow tinted sub-board and the black king cannot escape the d10-j4-j10 triangle, the position is also won on the full board, because such positions can be (optimally) won on that sub-board without letting the black king escape the triangle. Similar goes for the green sub-board. The same applies to an MxN board.

But the won positions are by no means restricted to such positions. In the position shown, for example, White can mate in at most 33 moves against any Black defence. There is, of course, a significant percentage of similar positions.

There are not necessarily forced wins if M and or N are too small. For example, there are no checkmate positions on a 1xN board.

There are, strictly speaking, also a relatively small number of forced wins on (sufficiently large, i.e. M,N > 2, M+N>6) boards which include no corner of the same colour as the bishop's square but do include a corner of the opposite colour. This includes the 7x7 board with the "wrong" coloured corners you ask about. This is also possible in a "wrong" corner of any board that includes such a corner, e.g. on an 8x8 board.

There are no wins on a board that includes no corners, i.e. where one or both sides extend indefinitely in both directions.

There are drawn positions on any size of board. This is the general case on boards that have no corner of the same colour as the bishop's square and on boards where one or both of M and N are too small and, I believe, on boards where M and N are both large. Here is one example on an 8x8 board.

Drawn positions are the exception on the standard board (less than 10% of all positions according to the Nalimov EGTB).

But I believe that on a 10x10 board there are also draws by repetition, where the lone king cannot force the capture of a piece, but the side with the pieces also cannot force mate. I think this becomes the general case for large M and N as it obviously is for odd M and N with the "wrong" coloured bishop.

So long as the board contains a corner of the same colour as the bishop's square and M or N remains at 8 or less, but it is not too small, mate will still be forcible generally for finite large values of the other and (somewhat irrelevantly) in as many positions as not for an infinite value of the other.

After reading DanStronger's post, I think my comments on draws by repetition on larger boards are erroneous. These were based on a 45-year-old analysis that I made when I first learned to play the ending (the details of which are now hazy). But I'm inclined to think the analysis was flawed. In that case, the percentage of draws should actually decrease as the board sizes increase.

I think the biggest distinction we can make here is how many moves it will take to mate the king. There is plenty of evidence above that proves it is possible to mate on an almost ainfinitely increasing board (assuming it stays a square and not a rectangular, as to why ai have no idea). In a tournament there is a 50 move rule to prevent needlessly long games. It is possible to mate with this scenario on a 8x8 board within the confines of 50 moves but with little room for error. The bigger the board, the more space you need to corral the King into the corner m which results in 90+ move mates.

To summarize, as long as the board is square (Length=width), then a KBN vs K mate is achievable. I cannot answer if the board is rectangular. aid someone else knows, they can answer that if they want or you could edit you question!

Not the answer you're looking for? Browse other questions tagged endgame checkmate knights bishops elementary-mates or ask your own question.

29
Is it possible to force checkmate with King, Knight, and Bishop vs. King?
24
How do you checkmate with the pair of bishops?
4
What are some techniques for BvN endgames?
3
2 rooks vs 2 minor pieces in a pawnless endgame
15
The difficulty of finding the winning idea in this knight versus bishop endgame
4
Can anyone please explain why this position isn't a draw?
11
Which piece combinations can mate a lone king without being aided by the attacking king?
17
Is there a double-forced mate position?