The reply 2...Nf6 to the Reti opening 1.Nf3 d5 2.c4 Nf6 is not even mentioned in my three Reti opening books. What is wrong with that? There must be a well-known answer that is simply part of the professional player's erudition because otherwise this move would get attention from the authors. 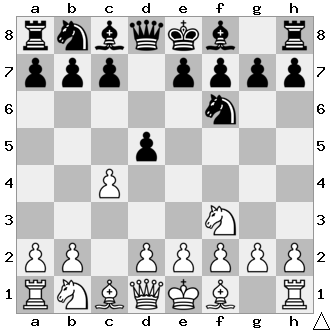 This is identical to the position that occurs after the move order 1. Nf3 Nf6 2. c4 d5. The central push d5 is common in many openings, for instance the Grunfeld, but here the timing is bad. The position after

is one I often get with white when I play online, and it usually ends up very well for white. White will follow up with e4 and get an advantage in the center with tempo.

The main difference with the Grunfeld is that there is no white knight on c3 that black can exchange the knight on d5 with, and the knight (and black's whole position) will end up slightly passive.

with a slight white advantage.

Black can also try 4... Bf5 to stop e4 temporarily, but then they have to be really careful. For instance

is very good for white.

White gets a strong center after chasing the Knight.

This is a simplistic answer, there is more theory about the placement of pieces which is why 4. ... Bf5 is considered a bad move.

4
Connecting opening book to chess engine
6
Queen's Gambit Declined: Marshall Gambit, how to decline it and keep full equality?
8
Why is the Ragozin 4… Bb4 not even considered against 4. Bg5?
7
In the books Wojo's Weapons, why was Wojo occasionally known to say “I'm too lazy!” when asked why he didn't play 1. d4 instead of 1. Nf3?
7
Is there an opening where both knights get behind c4 and f4 pawns?
4
Why is it said that beginning with 1. Nf3 2. c4 avoids the Benoni but beginning with 1. d4 2. c4 does not?
3
Why not 6.Ng3 against the French Rubinstein?
15
Wrong lines of play to illuminate right lines
17
Why does the London System have the reputation it has?
6
Why pin knights early in the opening?