Could you help me to find which game this is?

When I was a kid, I remember reading a newspaper article about a chess game. The article was written as if the writer was one of the players. It was a pretty surprising game and it looked as if it was a total domination. The article was like this:

I was just picking up the free pieces. I was so confident that I was dominating the board. I saw him writing "resign" in the notation paper. To make him more desperate, I took his rook with my bishop. I was waiting for him to flick his king. Then suddenly, he scratched the word "resign" and has written "Re8" instead. Then it hit me. I was losing.

The article I have read was a long time ago therefore I might be wrong about Re8.

Is this a famous game? If you know which game this is, can you help me?

In one of his books GM Alexander Kotov even coined a term "Dizziness due to success" which describes Chigorin's blunder that we just witnessed pretty accurately. Kotov even tells his own story. He was playing a game and achieved a completely winning position. His opponent lost any interest in his game, and mostly watched the games of other players. Moreover, he wrote "White resigned" on his score sheet, folded it and put it in his pocket. Kotov knew that his opponent was just waiting for a good moment to stop the clock and concede the defeat. Fortunately, such a moment was very close and Kotov took the White Bishop on f7. Guess what happened after that.

When Kotov's opponent executed his winning move, he took his score sheet out of his pocket, crossed out "White resigned" and it was Black who had to resign the game. It doesn't even matter to me if the White player did this little trick (with folding his score sheet) on purpose or he genuinely thought that the game was over. The point is once you start thinking that the game is over and your opponent is about to resign, blunders are almost unavoidable! 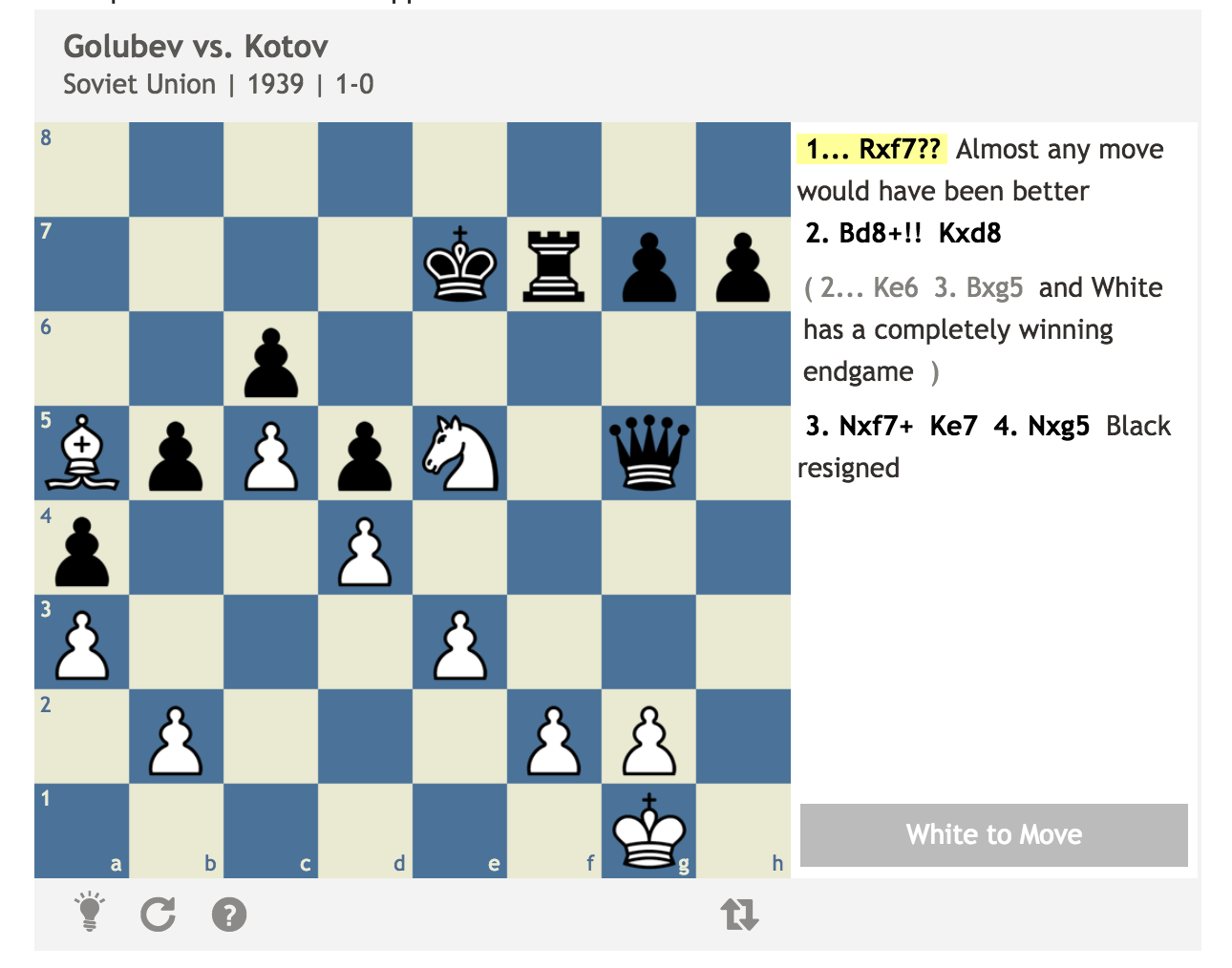 Sorry it is not an answer to the original question. It is supposed to be a comment to StudetT's answer - definitely correct one - but is too long to fit the comment format. Just a bit of chess history.

Dizziness due to success was not coined by Kotov.

It is a title a Pravda editorial, signed by Stalin (I have no idea who actually wrote it), published in March 2nd 1930. The phrase marked a beginning of a next phase of Stalin's purges and was probably the first notable example of newspeak.

By the time Kotov used it in Thinking Like a Grandmaster (in 1969 I suppose) it was already deeply rooted in the Russian language, and had mostly ironical (or even Orwellian) connotation.

The first time it was used in the chess context (again as far as I am aware of) was an article by Veniamin Blumenfeld (1884-1947), see Dvoretzkij, from the bottom of page 108. I cannot find when the article was originally published, but it was surely after the editorial: Blumenfeld quotes the game Sergeev-Grigoriev of 1932.

Not the answer you're looking for? Browse other questions tagged master-games sacrifice famous-games or ask your own question.

8
Why did Black resign this game?
7
Can you identify this game with a mate in 12?
4
Were my sacrifices sound in this game?
10
Which is the oldest chess game?
8
Trying to locate a historical game in which the win involves sacrificing two rooks
2
From which top class game is the endgame motive?
9
Game analysis: What would motivate a human player to sacrifice White Knight at move 10 in this game?
5
Could this kind of inaccurate sacrifice be countered?
34
Where can I find this game with a sacrifice followed by a long series of checks leading to a discovered mate?