What common patterns should I look for in chess?

When I started learning, I had lots of games where I lost lots of material through not being familiar with these sneaky attacks. I am talking about these: 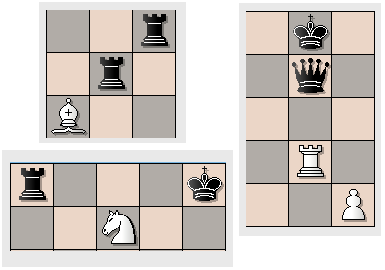 There are many more (two minor pieces being attacked by a single pawn, discovered checks that result in attacking important pieces, etc)

I think it will be of great help to study them again and have them freshly in my mind (they often go unperceived, both when spotting them, and stopping them).

What you here call 'patterns' are more commonly called chess tactics. See the Wikipedia article for Chess Tactics for a list with some visualization.

A fine example of a more complicated pattern is the windmill: Wikipedia article for Windmill

As pointed out, the "patterns" you were looking at are largely covered more abstractly in the domain of tactics... My favorite guide when I was new to chess on that was Yasser Seirwan's book Winning Chess Tactics. Once you get the basic ideas, the only way to improve on those is practice. I find the tactics sites like chess.emrald.net to be the best resource for rapidly improving your game.

But there are also genuine "patterns" to learn, which are also important. The difference can be thought of as patterns tend to be less an abstract idea, but a specific implementation of several of these tactical ideas in a configuration of the pieces you will often see. Most common are the mating patterns... which I'd reference you to my favorite chess book The Art of Attack in Chess, one I think should be on any serious chess players book shelf. Here is an online example of mating patterns, if you are interested.

These are basic applications of a simple strategem: you win games by threatening two things at one time, and the opponent can defend only one of them. Basic players will have two pieces attacked at the same time. At the advanced level, it might be two smaller threats, maybe the advance of two different pawns can be supported into enemy territory by the same piece.

As others have mentioned, what you have shown are common tactics (the pin and the fork) which are used to win material, generally based on a double attack, only one component of which you can answer. There are other tactics as well, including the discovered attack, x-ray attack (skewer), deflection and overloading. Often tactics are conjoined in a combination. It would be advisable to familiarize yourself with these from either an electronic or printed source, of which there are many available. In addition to these tactical patterns, you should also familiarize yourself with the common checkmating patterns so you can recognize them when they arise. These would include the Scholar's Mate, Fool's mate, Legal's mate, Philidor's Legacy (smothered mate), Morphy's Mate, Dovetail Mate, Epaulette Mate, and quite a few others, all of which can be found in the same sources as the tactics. Then regular play helps you to see any of these when they are imminent so you can react in time.

Not the answer you're looking for? Browse other questions tagged terminology patterns or ask your own question.

20
In Chess, are there simple “mechanics” that amateurs can learn to improve their game?

10
What are the setups/patterns useful in defence?
2
What are Complication and Simplification in Chess?
12
What is a fortress in chess?
5
What does “penned in” mean in Chess?
3
What types of pawns are there in chess?
4
What should be defined as an en passant checkmate?
20
What are “full piece” and “half piece” in chess?
5
What is “Chronological Order” in chess?
13
What is a “tornado” in chess?
7
What is the English maxim for “Rather losing a material / piece, than losing a tempo / an initiative”?