Ask Question
Asked 6 years ago
Active 1 year, 9 months ago
Viewed 1k times
0
Closed. This question is opinion-based. It is not currently accepting answers. 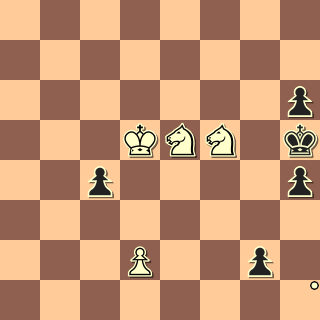 This is the famous Behting study, first published in the magazine Bohemia in 1906, which is often used as a demonstration that computers can’t solve all positions.

White to move and draw with a very elegant move.

Question is, is this study still beating engines?

Clarification: Suggesting best move, doesn't mean engine understands(or finds) the solution. Without evaluating it 0.00 or =/=, it doesn't mean it's solved. Actually, best move with -4.** means engine believes that best possible continuation for White is this move, with winning advantage for Black.

Imagine you ask a question to someone about a chess position in which White has a move which is the best and draws. You ask, which move is the best and why, and you get an answer like this: "Best chance is this move, but even if it's White's best chance, it looks losing". And you know that move draws. Would you accept this answer as correct answer? Definitely no.

I recommend to read:

Notes about edits: As the question turned into a discussion about whether the position solved by engines or not, I revised the question accordingly.

This question is totally about facts, and not opinion based. Some of the answers are opinion-based, but it's not the problem of the question. It's terribly wrong to close this question, instead of letting people discuss it.

It should be feasible for a chess engine to reach a 0.00 evaluation because there are only a few thousand drawing positions that need to be evaluated (depending on wK/bQ position, with or without the c/d pawns), and once the search has exhausted that space they'll all evaluate to a draw.

White to move and draw.

I am running SCID on the front and Stockfish 6 on the back. Stockfish is running on 4 cores with a gigabyte of RAM. The computer is an Intel quad-core 3.2GHz i5, 16Gb of RAM, 64-bit OS.

I am not using a tablebase. I am not sure it matters; the first move or two are the hard ones.

I think the "no computer can solve this" comment is very dated... the person who said it mentioned Anatoly Karpov...

And as requested (rudely), here's a screen shot.

This has turned into a hot discussion... I take it positively because we need more traffic.

I'm confident all the well written engines will give Kc6 with sufficient thinking time. That's because all other alternatives are even worse. The line starting with Kc6 is the only line that the computer finds with 2 knights vs queen. Everything else results in further material loss and therefore discarded.

Since the engine is able to see Kc6 would be the only move not losing instantly, the puzzle should be considered solved.

It's insane for the Stockfish engine to give a 0.00 score in this kind of position because it is simply not designed for something like this.

Not the answer you're looking for? Browse other questions tagged engines problems or ask your own question.

13
Computer evaluations: How trustworthy are they?

6
Why can't I analyze with Stockfish 2.0.1 in Winboard 4.5 beta?
19
Why do chess engines sometimes miss good moves (or take forever to spot)?
2
What are the scales of the numerical evaluations of the strongest engines based on?
3
How to go about beating chess engines?
5
I'm confused by UCI Pondering and Time Control
3
Analyzing using Chess Engines - Giuoco Piano/Steinitz Variation
11
Human-like engine for endgame training
8
Positions that stump engines
3
What are the most common checks in chess?
6
What is the difference between a brilliant move and the best move?