Are there endgames which could be forced wins if not for the 50-move rule?

All of the basic checkmates can be accomplished in well under 50 moves. However, in the 20th century it was discovered that some positions of certain endgames can only be won in more than fifty moves (without a capture or a pawn move). The rule was changed to include certain exceptions in which one hundred moves were allowed with particular material combinations. However, more and more exceptions were discovered and in 1992 FIDE abolished all such exceptions and reinstated the strict fifty-move rule.

I have never seen an example of this, though I used to think the K, N, B vs. K ending was one. When is it possible to force a win in 50 moves or more, but not less than 50 moves?

Yes, there are quite a few endgames that require more than 50 moves with best play from the defender.

Wikipedia has a list of material imbalances where it could take more than 50 moves depending on the specific position. Here are a few examples:

The following KNN v KPP endgame position is one: 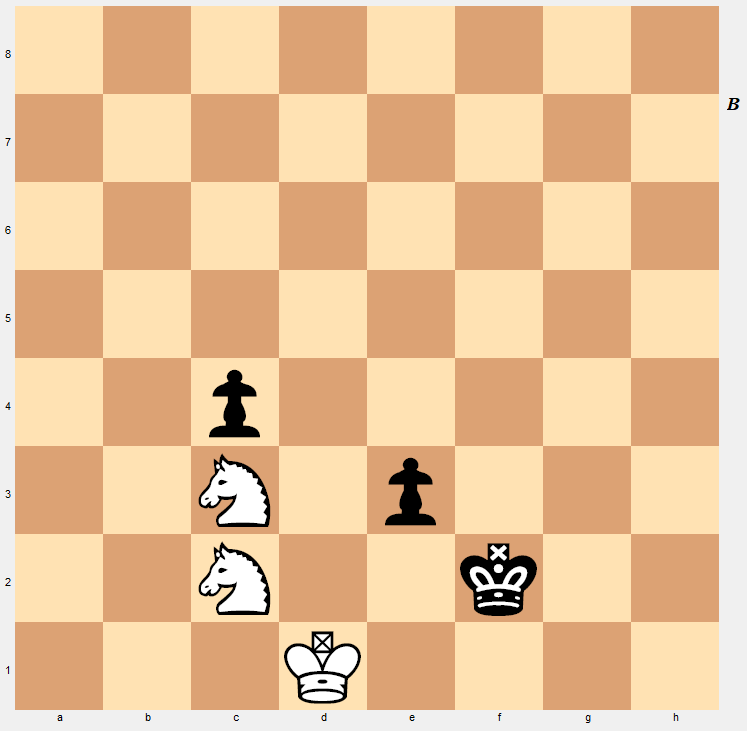 This is the third position in the "two knights v pawn" section of Averbakh's "Knight Endings" (Batsford edition) where it gives a White win in 17 moves, but Black's defence can be improved.

Not the answer you're looking for? Browse other questions tagged draw endgame 50-move-rule pawn-promotion or ask your own question.

18
The history of the 175-move draw rule
8
What are the different rules for claiming a draw?
12
Is the 50-move rule ever used in grandmaster games?
4
What are the hardest pawnless endgames that go over the 50-move rule?
3
Wording of Troitsky line rule
5
Is it possible to draw this endgame where I blundered my queening pawn?
4
The 50 Move Rule
6
Is it unsportsmanlike to underpromote to improve my chances?
38
Why is there a 50-move rule and a 75-move rule?