Plan from the position

I am not asking for analysis, just want to know what are the plans to continue for black .(white to move) 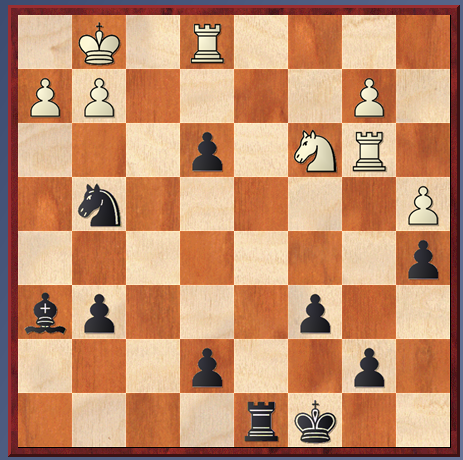 A plan without (extensive) analysis can only be given in very stable structures. Here, the position is pretty tactical and volatile. White might be able to round up the e3-pawn with Nd1 and h3. Then black has to calculate hard to not wind up in a very bad endgame.

So here my "plan" during a game would look like this: Use any tactical trick you can find to not lose the e3-pawn, and if you cannot avoid losing it, grab as much material for it as you can.

All this depends on white playing the most obvious move, Nd1, but she might try to strengthen her position in any other way and then you have to come up with different tricks. What you might want to keep in mind is:

It's hard to ask for plan when opponent is on the move.

This is my understanding without help of engine. White is now exchange up but 2 pawns down. However, Black's 3 isolated pawns look worrying. White needs to keep his knight in contact with e2 to stop the pawn advancing. My plan for white would be to put knight on e2, activate both rooks to attack the isolated pawns and counter-advance his king side pawn majority.

Black has the initiative here because of his close-to-king knight and white's backrank problem. So black should try attack and put pressure on white. If white makes a mistake, he might be able to checkmate/win material/advance pawn to e2. Be very careful when white put two rooks/king in the same colour, that's when your bishop and knight can fork them

One way to approach the strategy in this position is to just play one side. So, starting with Black and starting with most powerful piece first, the rook:

(A) Rd4 would put pressure on the a-pawn

(B) Rd2 and Nd6 would put pressure on the b-pawn

That's about it for the rook. Trading the rook does not help, because Black's rook is more active than either of White's rooks. Next most powerful piece, the Bishop:

(C) Bf4 pressures the h-pawn and improves the bishop

(E) Bb4 would make the bishop more active, but would put less pressure on White because the e-pawn would be less defended; in other words the pin on the knight does not appear to be worth much

(F) Nd6 would win if White played Re2 (because of Nc1), but if White plays Rf1, nothing has been accomplished

(G) Nd5 would win the exchange and the game, but it takes 4 moves to reach that square (eg Bf4, Nh6-f5-d5); note that Nd5-c2 might force a draw by repetition

(H) Nc4 would be a big improvement for the knight because it paralyzes White's Rb3 and makes the knight immune from attack; also the knight pressures the pawn on b2 from c4.

Finally consider the pawns. Moving the e-pawn would not be useful, except to support a knight on d4. Moving the b-pawn would be counter productive because it would activate White's rook on b3.

Okay, now consider White's strategies. White would like to trade a pair of rooks, since both of his rooks are passive. Giving back the exchange for a pawn would lead to a roughly equal game. White can use his king to defend potentially, but Kf1-e2 is problematic because of ...Rd2 or ...Rf2. Improving the knight to c5 would increase the scope of the Rb3. In fact, Ne4-c5 followed by Rd3 would be a big improvement to both pieces, but if the knight leaves the protection of e2 then, e2 followed by Rd1 could be a threat.

So, Black's main strategy should be to prevent Ne4 either by Rd4 or Nf6 and to try to get his own knight to c4. Black should also avoid exchanging rooks. If White plays 1. Ne4?? e2 wins because 2...Rd1 cannot be prevented (2. Nc3 Bd2 wins).

Not the answer you're looking for? Browse other questions tagged strategy tactics positional-play planning or ask your own question.

15
How to reach an open position in the 4 Knights Game without exchanging too much material?
5
King's Indian Attack plans for White after Black plays ..dxe4 and ..e5
4
White's plans from this position
3
Purpose behind the move
4
Choosing the best move in the given position
3
What plan should I have followed in this particular position?
6
What should my plan be in this middlegame?
3
Plan to proceed in this position
3
What are Black's plans in this position from the Breyer defence?
4
Winning plan for black in this line of French Defense: Advance Variation Main Line