Why didn't Donald Bryne capture with the queen instead of pawn (against 13-year-old Bobby Fischer in the Game of the Century)?

But I didn't really understand what happened at 12:40. The narrator says "now Bryne can capture the Knight with (1) the queen or (2) the pawn." Then he gives a sort of brief explanation on why Bryne chose to capture with the pawn, but I didn't understand. Here is an image of the position (White to move - Fischer was Black): 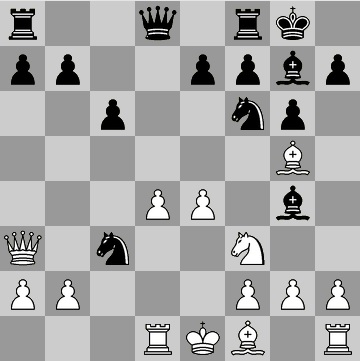 What would be a more in-depth explanation of why recapturing with the queen is a bad idea?

Since your link doesn't work, and we have no diagram of the position, I will assume that you refer to the position below:

What would be a more in-depth explanation of why capturing with the queen is a bad idea?

If White retakes with the Queen he loses a piece, and stays in horrible position that is 100% lost. Below is the illustration:

In order to defend the bishop on g5 from the knight fork (after retaking black knight on c3 with the queen), White must keep the queen on the c1-h6 diagonal. This is sufficiently well demonstrated in the above diagram.

Black wins by exchanging the bishop on g4 for white knight on f3 to loosen the defense of the white bishop on g5 after which he wins that piece with the queen's double attack via Qa5+.

The resulting position is just plain horrible for White, and practically 100% lost. Only drunk person would be able to squander such advantage with Black ( and they must be really really drunk). Even though at that time White was renowned GM, I think that a solid candidate master would win as Black easily in that position. That is why White decided to take with the pawn.

In general, it's preferable to recapture with the weakest piece available. If nothing else, this means that you lose the least material in the event of a sequence of recaptures on the same square.

In this particular case, putting the more powerful piece in that position would open up the possibility of Black forking two pieces on the next move. By using the pawn instead, it is only a fork of a piece and a pawn, and it's relatively easy to keep the piece alive and sacrifice only the pawn - upon which the Queen is still available to recapture the piece, winning the exchange.

Not the answer you're looking for? Browse other questions tagged analysis fischer captures or ask your own question.

8
Why is Byrne vs. Fischer (1956) regarded as the “Game of the Century”?
5
Did Bobby Fischer castle with a pawn promoted to a rook?
9
Why did Bobby Fischer quit chess after the match with Spassky?
2
Why is exposing my queen for capture better in this position (According to computer analysis)?
3
Why did Bobby Fischer play the 1992 rematch with Spassky?
2
Why is it better to capture the f pawn?
2
Bronstein vs Winter
4
Why didn't Spassky play 26. g3 in game 5 of Fischer-Spassky (1972)?
21
The Game of the Century - why didn't Byrne take the rook after he forked Fischer?