The theory of pawn breaks

Does there exist a theory of pawn breaks?

Of course, there exists a theory of static pawn structure and good bishops; but I was thinking of rooks rather than bishops, and of aggressive pawns that open files rather than positional pawns that control squares.

Are rules or principles taught that guide the chess student in placing rooks early, choosing the right pawn to push, and otherwise preparing pawn breaks?

The question of pawn breaks seems to torment me whenever I have the black chessmen and my opponent opens 1. d4. Opportunities seem to arise for my black pawns to force files open in such games, but when should one exercise the opportunity? Under what conditions is a pawn break likely to help? When is it unwise? Is a standard tactic known to punish my opponent by advancing my knight during a thwarted break? If either of two, connected pawns can lead the break, which should lead? What position should the rook take before the break? Which rook?

When no pawn break is advisable, what should one do with one's rooks? What should one do, period? What kind of play is possible without open files, anyway? Pawn-storm play on the wing? But, if so, then how does one prepare the pawn storm? -- or, in other words, we are back to the original question regarding pawn breaks, except that this time my pawn structure is trashed before I even ask the question. The pawn storm (done not because it's a wise plan but because I cannot think of any other plan) leaves me an out-of-position king and a losing endgame. I don't get it.

So, there are a dozen or so ways of asking more or less the same question: I have the black chessmen, you open 1. d4 and start to build a pawn center, I thrust a pawn in to break up your center -- yet, early or late, whether backed by a rook or not, whichever pawn I choose to thrust in, it always seems to be the wrong pawn. Why?

Leaving aside the question of wing play to skirt a closed center, a big trouble my central pawn breaks are repeatedly causing me is that, when I push the pawn, it tends to leave you not me the choice of which of the two files in question to open -- or the choice of locking pawns, opening no file at all. If you are a strong opponent, then you choose well for yourself and ill for me. Thus, my pawn breaks usually do not work.

HOW SUCH GAMES CONFUSE ME

Moreover, such closed games broadly confuse me, because tempo seems less important in such games. Using scarce tempos wisely is a relative strong point of my game; so, when tempos are not scarce, I don't really know what to do with the extra time. Shuffling rooks around aimlessly does not seem to help much.

REQUEST FOR ADVICE RE PAWN BREAKS

If you want an easy game, open 1. d4 against me, present a pawn center, and watch my play degenerate into purposeless futility. I do not understand how to play these games, I keep losing them, and I should very much like to learn why.

(If relevant, I am officially unrated, put play at about USCF Class C, or FIDE Elo 1500.)

A related question, with answers, regarding the meaning of the term pawn break, is found here.

It seems like there are really 3 parts to your question:

As a disclaimer, these questions are incredibly complicated, so take this answer as a starting point. Entire books have been written about pawn play. Furthermore, every position is different. While there are general ideas, the features of a specific position must be the main consideration.

So to begin - pawn breaks should be made for one of two reasons - to improve your own position or to deprive your opponent of good squares. This seems a little silly, but consider how your position can be improved - either your pieces can get better squares and lines, or you can create a passed pawn. A space advantage falls into the category of depriving your opponent of squares.

Bearing that in mind, pawn breaks should only be made when you can guarantee that your position will improve:

Moving on to part 2... Simply, rooks should be posted on the files that will be opened after a pawn break. While it frequently takes some calculation to figure out how everything will work out, once done, good squares for both rooks can be found. Usually this is behind the pawn that you will push, but frequently it is on an adjacent file.

Finally, the crux of the matter - how to plan for and utilize pawn breaks effectively. Generally speaking, you should only open the position in a part of the board that you already control. That means that if you have a preponderance of force on the kingside, for example, f2-f4 immediately should become a candidate pawn break.

When you prepare a pawn break, frequently you will want to recapture the pawn with another pawn. In this diagram, white has a space advantage but will eventually have to break the position open in order to win: 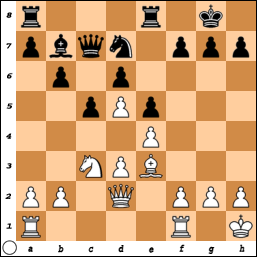 1. f4 immediately would be premature because black would gain the e5 square as an outpost for the knight. Instead, white should prepare the break with moves like g3 and Rg1. Only then should the break be seriously considered tactically. With that said, f4 should also be the only pawn break considered. Black owns the queenside, so a pawn break there would only serve black. The center is locked, so a move like d4 would only lose a pawn. Finally, g4 and h4 don't serve any purpose other than creating holes in the white position that black might later be able to utilize.

Hopefully that gives you a reasonable starting point, but again, every position is different and must be considered based on its own merits.

To address this issue:

"A big trouble my central pawn breaks are repeatedly causing me is that, when I push the pawn, it tends to leave you not me the choice of which of the two files in question to open."

A player that is in a position to push for a pawn break is often stronger on BOTH files, leaving his opponent with a choice of evils.

Another time to push for a pawn break is when a tactical advantage (e.g. a pin) forces the pawn break to go one way.

If the pawn break leaves your opponent with some advantageous choices, it is probably best avoided.

20
What is a pawn break?
2
When and where is it a good idea to make a pawn break in a closed centre position?

8
What's up with the doubled pawns?
5
Strategy in "double-isolated" Queen-pawn positions?
10
Why is the f6 pawn break in Advanced French so important for black?
12
Pawn confrontations: capture, push past, or leave the tension?
11
Quintuple pawns / Interesting pawn structures
3
Short and long term plans in a closed game in the Sicilian Defense
6
Artificially isolated pawn in the Caro-Kann
2
When and where is it a good idea to make a pawn break in a closed centre position?
10
How to quickly calculate two pawns facing two pawns
5
What is the idea behind a d4 e3 f4 pawn setup?